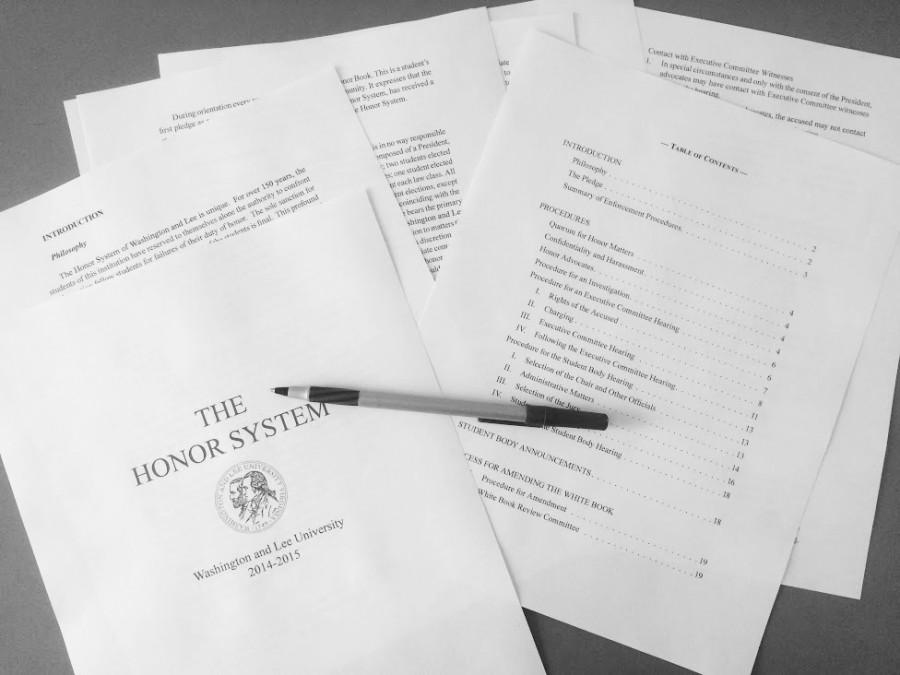 The White Book Review Committee wants more involvement from the student body during its amendment process.

The committee is done with its initial review of the White Book, which involved going line by line through the entire document. Law student Zack Wilkes ‘15 says the committee is seeking student feedback on several major changes.

One issue under consideration is whether a student should be required to testify before the Executive Committee if he or she is accused of an honor violation.

Another topic the committee is seeking student input about is whether should students know if there’s an ongoing EC investigation against them.

As of now, the person is notified 72 hours before the EC has a closed hearing.

“Some people think that they should know as soon as there’s an investigation,” Wilkes said. “The down side of that is if you know the EC is investigating you, you can panic when it could be dismissed out of hand.”

The committee has discussed changing how much time an accused student has before he or she can withdraw from an open trial. In 2013, a student was accused of an honor violation and chose to take the case to an open trial. But just days before the trial, the student withdrew from the university despite the EC and the university’s preparations for the trial.

“We’re discussing when can you withdraw and still have withdrawal listed on your transcript, and can you do that right before the doors of Lee Chapel open?” Wilkes said. “What’s your time period for doing so? We don’t have a firm answer yet, but it is something we’ve looked into.”

The committee will send an email out to the entire student body in the coming weeks with a list of potential issues asking their opinions on changes they would like to see. First and foremost, Wilkes wants to make sure that students know that the committee exists and give them the opportunity to offer comments on the process.

Despite its national and local prevalence, sexual assault is one issue that the committee has chosen not to discuss during the review process.

“The SFHB handles sexual assault, and we’re not looking to pull sexual assault under the jurisdiction of the EC,” Wilkes said. “I’m not sure we even have the power or the authority to.”

Wilkes said that in the past, the committee has held student forums to allow students and faculty members to engage in these discussions.

“We want to hear from everybody, and if people end up asking for a student forum, we’re more than happy to do so,” he said. “But we don’t want a forum with 10 people in attendance.”

After they receive feedback from students, they will consult with select faculty members

“It says pretty much what we want it to say and what we think it should say,” Wilkes said. “We just want to put questions out to the student body to see if they think there are any changes.”

The committee’s full report is due to the EC on March 1.