General of the Week: Ron Tassoni

With an overall record of 25-6, wrestler Ron Tassoni, ’16, has tied the W&L school record for wins in a season. This accomplishment earned him the title of this week’s General of the Week. 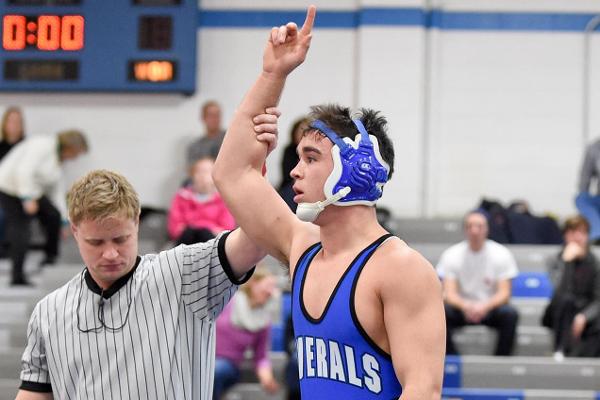 How did you start wrestling?

RT: “I started wrestling when I was really young. I think in kindergarten, but I was really bad. My dad was the coach for the little league team, so he didn’t really push it. When I hit 14 years old, I thinned out and started getting serious about the sport.”

You tied the record for wins in a season. How does that feel? Was that a goal for you this season?

RT: “I never track my season in terms of wins, but yes, it was a nice side effect in a sense. I think there are bigger things to accomplish though, and I have other goals as well.”

What do you do to prepare for a match? Any special rituals?

RT: “Lately, I’ve been eating half a bagel with cream cheese, a banana and yogurt. I drink Gatorade too. Also, recently I’ve been drinking a cup of coffee if I can.”

Do you have a favorite wrestling memory?

RT: “Yes, last year my regional performance. I placed fourth, but you need to get third to qualify. Although I didn’t get exactly what I wanted, I started to understand that I could compete at a high level. I was proud of myself.

What do you enjoy most about wrestling?

RT: “I enjoy that it is an individual sport where what you put into it is what you get out of it. Your success really depends on the work you put into the sport.”

Do you have a favorite athlete or role model?

What are your interests outside of wrestling?

RT: I enjoy cars and games. I also like playing sports outside with friends.

What is your major? Why did you chose it?

RT: Geology. It relates to my hobbies outside of school, and I like to be outside. Geology is the one major where I knew that I wouldn’t be a classroom 100 percent of the time. My classroom would be mainly outside. I like that it is challenging and hands-on.

Describe yourself in three words.