Staying on the ball: The Phi checks in with Generals Soccer 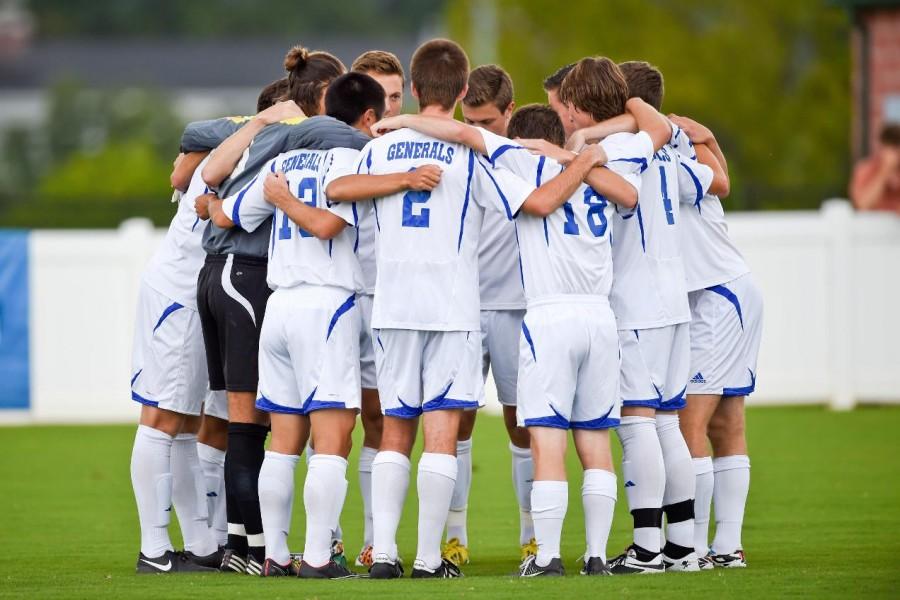 The 2015 Men’s Squad has 12 first-year players on its roster and 17 returning athletes. Photo courtesy of W&L Sports Info.

The Washington & Lee men’s soccer team looks to improve its offense in hope of making the NCAA tournament by season’s end.

The Generals started the season 2-2-1, registering wins against Greensboro College and Southern Virginia University. Their two losses came against Stockton University and Catholic University and the team’s lone tie was against Berry College. They have no goal differential.

“We have to fall forward,” Bayles said. “The season is not long enough to take breaks or take steps backward. We need to learn from each game and each practice to keep improving and be playing our best soccer by the time the conference tournament starts in November.”

Bayles, a midfielder, said that the team is young but balanced. There are no superstars on this squad, but the talent is evenly distributed throughout. Enough so that the Generals were picked to finish fourth in the ODAC in a preseason ranking behind Roanoke College, Lynchburg College and Virginia Wesleyan College.

Something the team can improve upon from last season, Bayles said, will be finishing off attacks. He believes that even though the team is young, the underclassmen can step into roles left by graduated seniors.

“We have a young team but they have all thus far stepped up to the challenge,” he said. “I imagine they will continue to impress as the season goes on.”

Not only the younger players, but the team as a whole, will have to play tight without committing many mistakes this season if it wants to win the ODAC tournament.

“It is something we have been shooting for for three years now,” Bayles said. “We have numerous auxiliary goals, but they are all built around the ODAC Championship and a chance at the NCAA tournament.”Ben Bayles, ‘16, is serving his second year as captain of the Generals. Photo courtesy of W&L Sports Info.The team’s next home game will be Sept. 30 against Emory & Henry College at 4 p.m.

The team’s next home game will be Sept. 30 against Emory & Henry College at 4 p.m.

The Washington & Lee women’s soccer team looks to overcome a conference championship loss last season and vault itself into the NCAA tournament.

The Generals fell to Lynchburg College in the ODAC championship game last year after conceding a goal 75 minutes into the match. The Hornets won their fifth straight ODAC championship and eventually became national champions. They were also preseason favorites to win the ODAC again this year. W&L was ranked second.

Erin Harvey, ’16, is a captain for this year’s team. She said that the team’s expectations this season will be similar to what they have been in the past: lofty.

“We want to win ODACs first and foremost,” Harvey said. “Winning the league would secure a spot in the NCAA tournament where I think this year’s team could make a successful run.”

Harvey, a hybrid midfielder and forward, believes that the team’s depth, which it lacked in past seasons, will prove to make a difference this season.

“Having cover in all positions gives us more flexibility,” she said. “We have both returners and first year players ready to fill the gaps left by the graduated players.”

The back line is where the greatest depth lies. The Generals graduated no defenders last season, so the chemistry on the team’s defense remains strong. Chemistry, Harvey said, has been one of head coach Neil Cunningham’s main selling points to his team this year.

“A focus of this year’s season has been to create a positive team dynamic,” Harvey said. “I think our coach has been trying to stress that the result of being supportive teammates and accountable, invested players is a positive team chemistry.”

The Generals have started the season on a positive note. They won three of their four opening games, dropping only a 1-0 game to Emory University. The team has a +3 goal differential in its first four matches.

Over the weekend, the Generals played their first ODAC game against league opponent Randolph and ran away with a 9-0 win at home. They lady Generals will take on Bridgewater College at Bridgewater on Sept. 23 at 4 p.m.

Note: these stories appeared as two different articles in the print edition of The Phi this week.