Three cheers to 400 years of Shakespeare 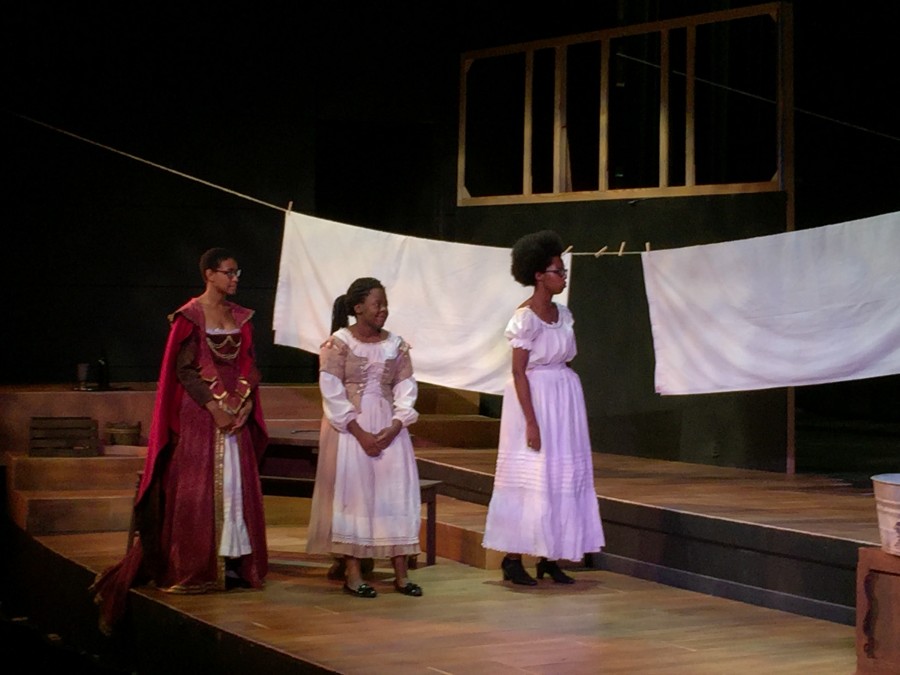 Cast members performing during dress rehearsal the week prior to opening night. Photo by Savannah Kimble, '18.

Attempted murder. Bawdy humor. Catty women airing dirty laundry. These are just some of the elements of Desdemona that make the play about more than its title suggests.

As part of the university’s year-long Shakespeare 2016! celebration, students will perform Paula Vogel’s Desdemona: A Play About a Handkerchief, in Keller Theatre Oct. 11-13 at 7:30 p.m.  Shakespeare 2016! was organized by English Professor Hank Dobin to commemorate the four-hundredth anniversary of William Shakespeare’s death.

“This show is about women who are completely trapped in the culture in which they live and the ways they defy that,” Kate Powers, the play’s director and Sessoms visiting artist, said. “It’s about the many different ways in which a patriarchy denies women their voices, and it also asks the question if women in different social classes can even be friends—it really throws the focus onto the ladies.”

Concentrating solely on the three female minor characters from Shakespeare’s Othello, Desdemona explores the women’s connections with each other while adding a modern feminist twist to their stories.

“Because there are a lot of factors in Emilia, Desdemona and Bianca’s relationships, understanding them and giving a nuanced performance that would allow the audience to understand them has been pretty tough,” actress Iman Messado, ‘19, said. “I’m most looking forward to speaking with audience members afterwards. I would love to know what impressions the play gave them on the central themes we tried to cover—especially female friendship, sexual freedom and social mobility.”

Desdemona is one of six productions the theater department will present throughout the year for Shakespeare 2016!.

A total of over 20 Shakespeare-related theater, dance, music, art and speaking events are planned for the entire year, including British actor Ben Crystal speaking over “The Once and Future Shakespeare,” an orchestra concert featuring Elizabethan music, a Shakespeare Feast in the dining hall and an exhibit in Staniar Gallery of original Shakespeare prints from the Folger Shakespeare Library.

“About two years ago, I started talking to some of my colleagues in the English department, and some of my other colleagues in the theater, history and other departments, and said, ‘Let’s see what we can put together as a year-long celebration for Shakespeare’s legacy,’” Dobin said. “Everybody really came through in a big way, which is why we have such a rich array of things that will be happening. So the whole idea is just to make the whole year, about a couple things a month, something Shakespeare-y.”

The university has also partnered with the Virginia Foundation for the Humanities, the Virginia Commission for the Arts and the American Shakespeare Center to form the Virginia Shakespeare Initiative, which works to increase participation in Shakespeare celebrations statewide. The organization’s website, www.vashakespeare.org, features a full calendar of the year’s events.

“We’re trying to encourage organizations, whether they are museums, libraries, universities, dance companies or theater companies, to put together events celebrating Shakespeare,” Dobin said. “Now there are dozens and dozens of events going on statewide…and I think we’re really the only state in the country that has organized this kind of thing.”

Dobin said that while Shakespeare may not be able to solve the world’s problems, the issues and elements of his plays provide situations and characters that are relevant to all generations.

“I don’t know any dramatist who can evoke any emotion, whether it is laughter, or tears or horror, better than [Shakespeare] can,” Dobin said. “But most of all, his language is some of the richest, most evocative and beautiful language that’s ever been produced. I believe in trying to cultivate a love for that kind of literature and that kind of drama.”

Tickets for Desdemona are $5 and are available for pre-order on Washington and Lee’s website or by calling the Lenfest Center Box Office.