General of the Week: Tommy Thetford

Tommy Thetford, ‘17, was recently named the D3swimming.com Men’s Swimmer of the Week after a dominant performance in the team’s meet against Centre College. He has also qualified for the 2016 Olympic Trials in Omaha. Thetford took some time out of his schedule to speak with the Ring-tum Phi this week about swimming, school and more. 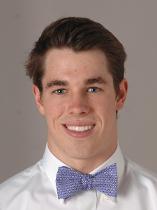 Phi: Could you tell me a little bit about how you became a swimmer?

TT: Well, my parents did, in a sense, throw me in the pool when I was young. I started swimming competitively when I was four years old, only swimming in the summers. I began year-round swimming when I was 8 and continued until I was twelve. I was doing extremely well when I was about 10 years old, but soon after, when everyone else started to grow, I didn’t hit my spurt yet. Over the next two years, I began to fall behind everyone else and when I was twelve, I had felt a bit burned out, and I quit until I was about 16, when I hopped back in the pool after a summer of coaching and realized that it was time to get back in the pool competitively. I swam year-round for my junior and senior years of high school with great improvement of my times in those years.

Phi: How much do you eat a day?  What’s your favorite pre-meet snack?

TT: I would say that I eat between three to four thousand calories a day to keep up with our rigorous training schedule, 99 percent of which is at D-Hall. As for my favorite pre-meet snack, I would say it would have to be oatmeal. It’s one of my only pre-meet rituals, oatmeal in the hotel lobby before every morning session. As far as at the meets goes, I would say Quaker Chewy Bars hit the spot.

Phi: Since qualifying for the Olympic Trials next year in Omaha, how has your mental approach shifted, at all?  Are you more confident?  More anticipatory?

TT:  I have had my sights set on Olympic Trials since NCAA’s last year. Once I saw how fast I could go, the qualifying time for Olympic Trials was all that was on my mind. After a rigorous summer of training and qualifying, I would not say my outlook has changed too much. It’s every swimmer’s dream to be able to go to Olympic Trials and I am extremely anticipatory, but all I can do right now in the season is to work my hardest and swim one day at a time, making sure I put my full effort into every single practice.

Phi: What are your personal goals for this season and your career at W&L?

TT: This season, I have set my goals especially high. I’ve come into the season already in good shape (where I was lacking last year) and ready to work. This year, my goal is to break 19.5 in my 50 yard freestyle, 42.99 in my 100 yard freestyle, and 1:36.99 in my 200 freestyle. Some people might say that these goals are unreasonable looking at my times from last year. but I figure if people aren’t questioning your goals, then you clearly have not set them high enough.

As for my career at W&L, my first and foremost goal is to continue dropping time throughout my four years here. It is common that people stop dropping time and “plateau” at a certain point, and I really do not want to face that. During my time here, I do want to set a Division III record in any of my events, which are not too far off of the goal times I have set for this season.

Phi: What do you like to do when you’re not in the pool?

TT:    Most of my time (when I am in-season) is spent in the library. W&L coursework really piles on with huge obligations like swimming that take massive chunks out of my day. When I do have the occasional free-time, I like to sit back with a couple buddies and play Super Smash Bros on N64. I like to throw on my headphones and listen to music after a really long day, but as a swimmer, free time doesn’t roll around that often, so I really try to capitalize when I can.