Catching wind of the Renaissance

The Shakespeare 2016! celebration continues with a performance from the Washington and Lee University Wind Ensemble 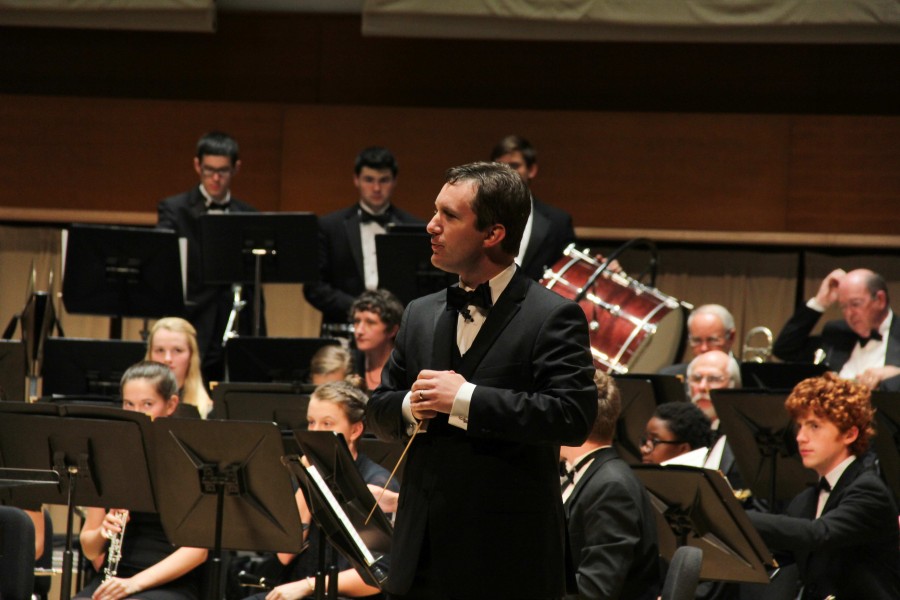 The Globe Theatre came to Lexington on Nov. 3 when the Washington and Lee University Wind Ensemble performed music from the English Renaissance that was inspired by Shakespeare.

The concert was part of the university’s Shakespeare 2016!, which is a year-long celebration in honor of the 400th anniversary of William Shakespeare’s death.

“Most of the tunes we played are either meant to accompany Shakespeare’s plays or came from Europe around his time period,” trumpet player Phillip Harmon,’17, said.

The concert was performed in Wilson Hall by students, faculty, staff and community members and was conducted by Christopher Dobbins, assistant professor of music and director of instrumental activities.

They performed the following pieces: Gloriana by Jay Bocook; William Byrd Suite by Gordon Jacob; Roselind in the Forest of Arden by Alfred Reed; Gallimaufry by Guy Woolfenden; Whisper to Their Souls by Samuel R. Hazo and Courtly Airs and Dances by Ron Nelson.

The opening piece, Gloriana, was the first performance since it had been published, according to Dobbins. The piece was based on an English Epic poem called, “The Faerie Queen.”

Although this is Dobbins’ first year with the university, he has directed two wind ensemble concerts so far.

“We are delighted to have Professor Christopher Dobbins join us this year,” Dean of the College Marcia France, who played the flute and piccolo, said. “He is off to a great start, and he has really done a lot with the group in just 8 weeks. I look forward to many more years playing under his baton.”

Each piece brought both challenges and rewards for wind ensemble members as they progressed as musicians and performers.

In addition to developing their instrumental skills, some of the members feel that performing with a variety of people is one of the best parts of wind ensemble.

“It is wonderful getting to work with students in a completely different capacity from my role as a professor or dean,” France said. “I am just another band member: We all work together toward the common goal of making music. Over the years I have been fortunate to develop close 4-year long relationships with students I might otherwise never have met.”

Harmon believes that the Wind Ensemble would not be the same without the community members’ contribution and talent.

“There is something magical about the rehearsal process,” Harmon said. “Having the community members and faculty join us is a blessing. There is a wealth of musical talent in our community. Having the opportunity to practice and play with these awesome people every week only helps to make us better musicians.”

Just like the Wind Ensemble, the audience was made up of students, faculty, staff and community members.

Leila Lubin, ’19, went to the concert to support her friends that were performing. As a dancer, she said she had a special appreciation for the piece, Courtly Airs and Dances.

“It made me feel like I was back home performing my ballet pieces because it was classical music,” Lubin said. “I was choreographing in my head while they were playing.”