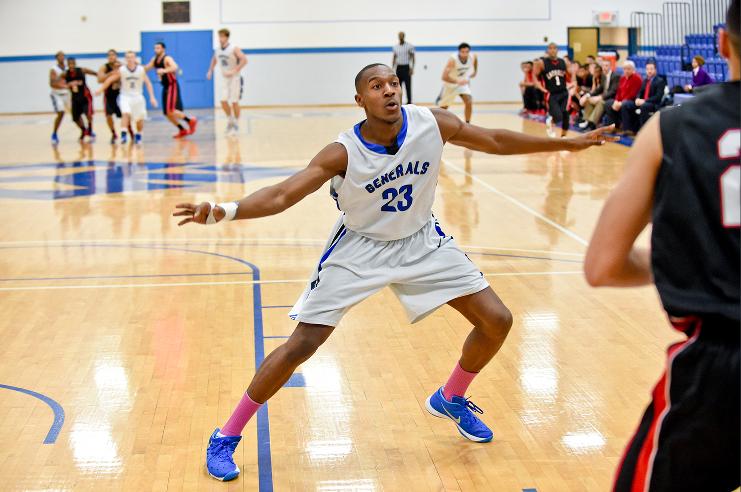 Jok Asiyo, ‘16, has been a crucial player for the Generals this season. He had 8 points, 4 rebounds and 1 block in the win against Ferrum. Photo courtesy of W&L Sports Info.

After a rough start to 2016, the W&L men’s basketball team used a pair of home victories last week to regain its footing and get the season back on track.

“When you’re at home, you have your home crowd, you’re kind of in a position to get back in the hunt in conference play, it helps,” forward Jim Etling, ‘16, said.

The home stand turned out to be just what the team needed, as the Generals beat both Ferrum and Shenandoah. A third home game was originally scheduled for Jan. 24 but was moved to Feb. 8 due to snow.

“I don’t worry about our guys if we lose,” Head Coach Adam Hutchinson said. “If something goes wrong, if we’re challenged and it’s a difficult situation, our guys are going to respond.”

This has certainly been the case so far this season, as the Generals have bounced in and out of the win column regularly.

“I know how much our guys appreciate playing in front of the home fans,” Hutchinson said. “Last night, a bunch of their classmates lined up to shake their hands on the way out of the gym. I think that means a ton to the guys, I know it does.”

Hutchinson said he recognizes that there are more important things than seeing his team win every game, however. Hutchinson also said he emphasizes the importance of keeping focused on practice and taking progress one game at a time.

“January’s always a grind, you know, school’s back in session, we’re kind of at the midway point, you’ve been playing for a long time, it’s hard to see the end,” Etling said. “You really have to stay mentally focused, and that’s always a challenge.”

The team certainly will have to treat each game with importance, as the remainder of its schedule will be played entirely in the ODAC.

“I don’t think there’s a distinction between ODAC and non-ODAC,” Hutchinson said. “That happens if you schedule an easy non-conference schedule, but we made a point of not doing that.”