The future face of technology 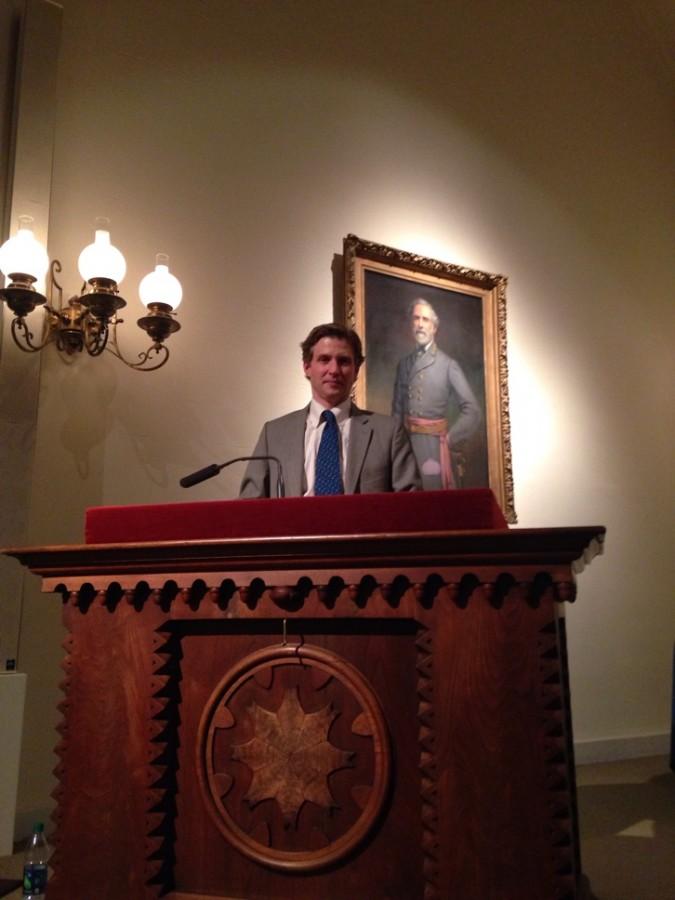 Technology policy expert Alec Ross said tomorrow’s economy will not tolerate mediocrity in a speech he gave to Washington and Lee students on March 14.

“We are sort of chapter one, page one, for a whole new suite of industries that are going to define our future,” Ross said. “Motivated, high-capacity people will be fine. What’s going to be punished is mediocrity.”

The talk covered topics Ross described in his bestselling book, “The Industries of the Future,” and was organized by W&L’s Contact Committee, a student organization devoted to bringing important speakers to campus. The Connolly Center for Entrepreneurship and Career Development also sponsored the event.

Contact Committee Chairman Jack Anderson, ‘16, said the committee chose Ross because they wanted to inform the student body about possible changes in the future of the economy.

“Alec Ross provided a well-informed perspective on the economic and societal shifts that are likely to occur over the short and medium term due to technological advances,” Anderson said. “His experiences as both a technologist and a civil servant helped paint a vivid, imaginative picture of the challenges and opportunities today’s young generations will encounter in the future.”

Ross started off discussing his former occupations that had fueled his interest in the future of technology, particularly his position three years ago as senior advisor for innovation to former Secretary of State Hillary Clinton.

“The ugliness of current presidential elections aside, I believe there has never been a more important time to enter into government service,” Ross said. “You can be a good steward of public welfare.”

Ross described how, after the 2010 earthquake in Haiti, he and his staff developed the idea for Americans to donate $10 every time they texted “Haiti” to a certain phone number. He said his team then built an online marketing program that used this concept to raise more than $30 million in two weeks.

“My job was to take smart, young, geeky people and attach them to foreign policy challenges,” Ross said. “The path that I took was all about trying to see around the corner and solve problems, usually with technology at their cores.”

Ross said that after his government service, he began thinking about how technology will impact the future, which led to the premise of his book. He discovered that people have created 90 percent of the world’s entire data in just the last two years.

“Data is the raw material of the information age,” Ross said. “I genuinely believe there is going to be a proliferation of platforms created where people like you are going to say, ‘I don’t really like how this works. I’m going to make it better.’”

Ross also emphasized the prevalence of robotics in the future. He said in the last 18 months, scientists have made progress toward robots learning to function three-dimensionally and carry out complex tasks such as grasping.

Ross made these assertions with a note of caution.

“This combination of artificial intelligence and robotics is going to have a big impact in all of your futures,” Ross said. “With the scientific and technological progress, the need to assert our human values grows ever stronger.”

After making his claim about the future’s intolerance of mediocrity, Ross’ final comments were to encourage his audience to be interdisciplinary learners who strive to eliminate gender biases and are not afraid to take risks.

“Make mistakes of commission rather than omission,” Ross said. “I’ve actually learned more from my failures than my successes.”

Members of the W&L community can reach out to any Contact Committee member if they wish to watch a video recording of the event.