Emphasizing ethics in the media 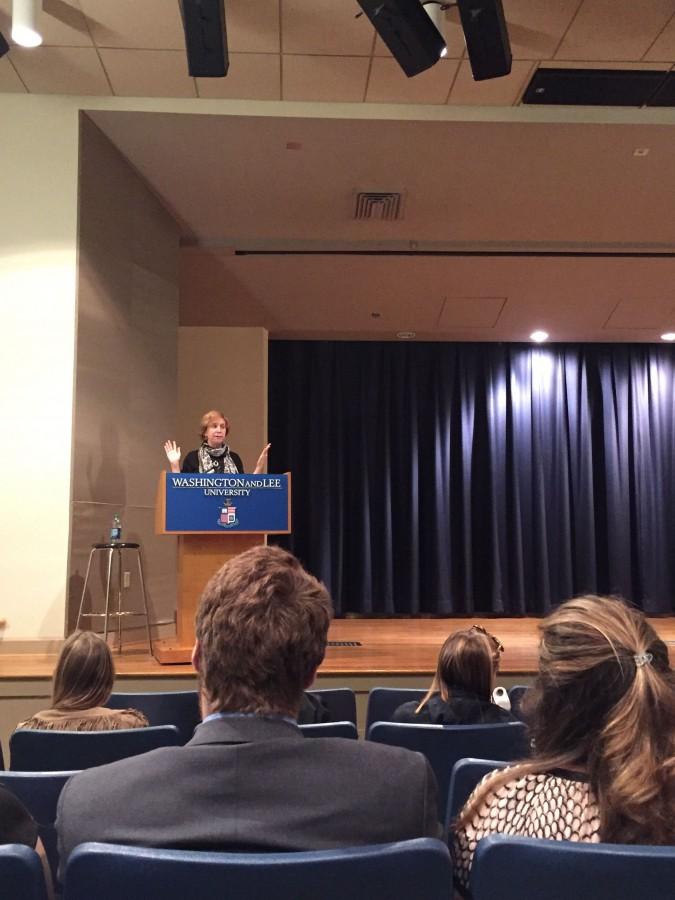 Independent Media Executive Vivian Schiller delivered Washington and Lee’s 61st Media Ethics Keynote Address on March 18, telling the audience that she believes ethics is the key for standing out for both publisher and marketers in the media industry.

Schiller’s speech, “Ethics and the New Media Landscape,” was held in Stackhouse Theater and was sponsored by the Knight Program in Media Ethics and the Department of Journalism and Mass Communications. Schiller talked about the relations between the media ethics and three industries she all worked at: publishing, technology, and marketing.

“They are absolutely distinct practices. They have very, very different goals. Yet each of them now is not only transforming but converging,” Schiller said. “With that convergence, they are forever altering what we know and believe.”

Maria Jose Bustamante, ‘18, said Schiller’s speech was relevant to what journalism students are facing in the real world.

“I thought [Schiller] was really tech savvy,” Bustamante said. “She is very up to date with the transformations that are occurring in the media world right now. Her speech converges between marketers, publishers, and the technology field.”

Schiller said back in the day, the obligations of the three industries were much clearer than today. Marketing was about the brand, and news acted as the gatekeeper with “content.” Technology was so expensive that it kept everyone out, until Apple Co-Founder Steve Jobs and Facebook Co-Founder Mark Zuckerberg profoundly changed the way people consume news.

“Today, most Americans discover news in a ‘feed,’” Schiller said. “Over 80% of Americans today are on Facebook, and over 40% of them consider Facebook as a source of news.”

People used to click news links on Facebook. The links then took readers to the news organization’s site until 15 months ago, when Snapchat stories successfully broke through the concept. Snapchat now bundles pieces of information into stories right on the platform.

Other platforms like Facebook, Apple News and Twitter are all practicing the same concept now. Facebook created Instant Articles, which gives publishers 100% of the revenue. With Instant Articles, readers stay on Facebook’s platform to read articles.

“There will be no reason to leave Facebook ever,” Schiller said. “It is also destroying the concepts of news destinations.”

Now the three industries have mixed up and are all about content and brands. Schiller said when it all sounds like a swampland, the key is ethics.

Former editor of The Boston Globe Martin Baron once defined the concept of “brand,” which Schiller thinks also acts as a definition of ethics.

“It is our soul, it is our spirit, and it is our identity. It’s what defines us, and it is what sets us apart,” Schiller quoted Baron. “It is ultimately our compass.”

Schiller said it is not a burden to maintain ethics in everything you do. Rather, it is a point of differentiation and an advantage in the struggle to stand out.

Schiller joined Twitter after 20 years of working at some of world’s best publishing companies like The New York Times, CNN, NPR and NBC News.

Most recently, Schiller signed on as the Executive Editor in Residence of Weber Shandwick, one of the world’s leading global public relations firms, and looks at the media industry from a marketer’s point of view.

Knight Professor in Journalism Ethics Aly Colón worked with Schiller at NPR when Schiller was the president.

“I thought this speech was an excellent opportunity to help people understand the transformation and the challenges that are taking place in media today, and how they could be aware of the ethically challenges that they face and the way of handling, in a way that helps them maintain their trust,” Colón said. “The critical ethics is to be able to have people to trust you.”

Colón also recognized Louis Wendell Hodges, the Knight Foundation Professor of Journalism Ethics Emeritus, at the event. Hodges died last month at the age of 83 after 43 years teaching ethics and religion at W&L.

“We would not be here without him,” Colón said.