Sipping lemonade for a cause 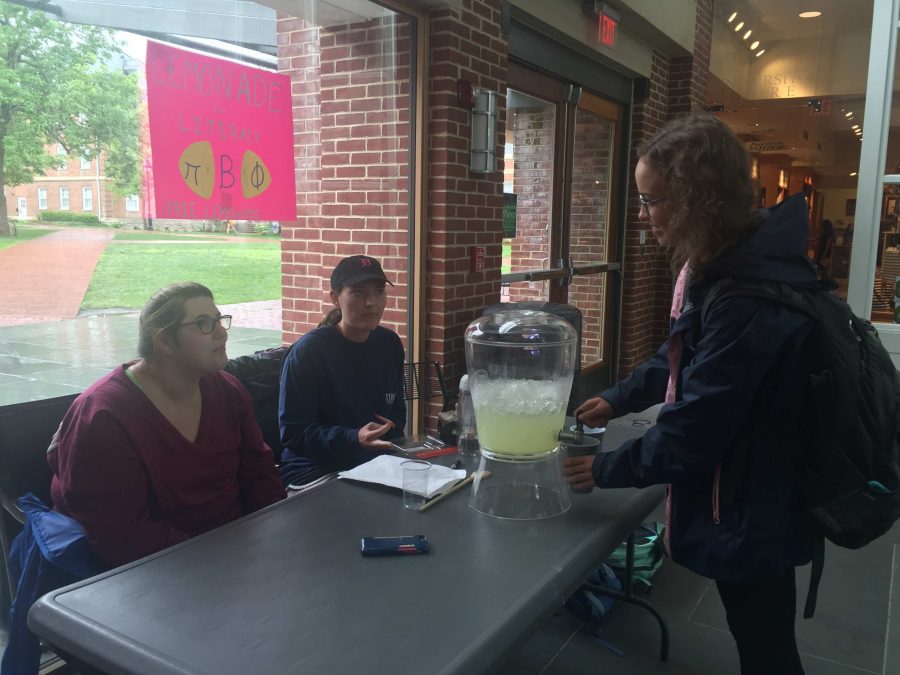 Sorority women of Pi Beta Phi at Washington and Lee held an event Tuesday through Thursday to raise awareness of American illiteracy with the help of a classic all-American beverage.

The event, Lemonade for Literacy, was intended to make other W&L students more cognizant of illiteracy in the United States. To accomplish this, the women handed out free cups of lemonade with statistics written around the rim to passersby in Elrod Commons.

The statistics included information from DoSomething.org, a global organization with multiple campaigns to bring about social change. According to DoSomething.org, one in four children in America will grow up without learning how to read.

Morgan Maloney, ‘19, is the sorority’s interim vice president of philanthropy during spring term and was the primary organizer of Lemonade for Literacy. The current vice president, Emily Limmer, ‘18, is currently studying abroad in Spain.

Maloney said organizing the event would not have been possible without the help of the other women in her chapter.

“The entire sorority has been so helpful in reaching out and volunteering their time,” Maloney said.

Lemonade for Literacy was strictly an awareness event, which means the women did not accept any money in the form of payments or donations.

“With Lemonade for Literacy, we’re just trying to spark people’s interest in the problem of child illiteracy in the United States,” Maloney said. “Also, we’re trying to make people aware of our philanthropic mission. Our sorority sisters manning the tables know about the problems of illiteracy and can talk to people who are interested.”

During winter term, the women hosted Book It for Literacy, a fundraising 5K. Both the 5K and Lemonade for Literacy were focused on Pi Beta Phi’s national philanthropy, Read > Lead > Achieve.

Maloney estimated that by the end of the three-day event, the women had given away over 100 cups of lemonade.

“I think people have been enjoying the lemonade, and hopefully have been learning a little more about illiteracy,” Maloney said.