Each week, the Phi will highlight two captains and learn a little about what drives them to be leaders, both in the game and in the locker room. 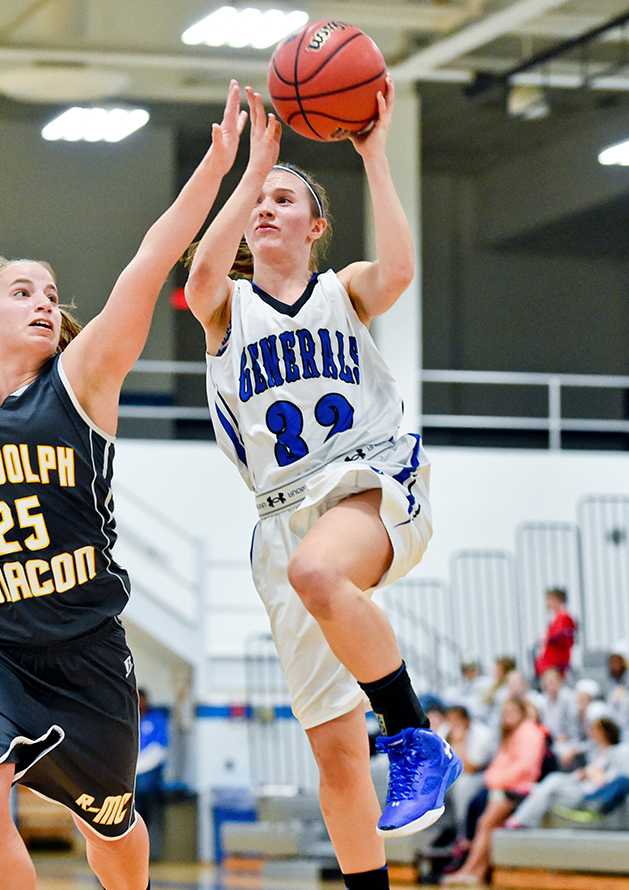 For Jackie Clifford, ’17, being one of the captains for Washington and Lee’s women’s basketball team is all about treating the team as individuals and respecting all of her teammates.

“I think trying to build one-on-one connections with people is part of what I am trying to do as a captain,” Clifford said. “I think building those personal connections really makes it a better experience for everyone. If anyone has any problems as a captain it is important to be open so that people are willing to talk to you. When everyone is willing to come talk to each other, not just as a team, but as more of a family, it is very important.”

Clifford, who is averaging a career high of 12.3 points per game through 11 games this season, has big aspirations for her “family” this year, as she tries to motivate them to finish strong.

“There is definitely more of a sense of urgency this year since it is my last chance to try to win an ODAC championship and I think we have a great group of girls to be able to do that with,” Clifford said. “Coming up, we have some of our most important games of the season because we are now playing more in-league games as opposed to out of league games. We really see that it is crunch time with a month and a half left and now is the time to really show other teams in the ODAC what we can do.”

In order to achieve this success, Clifford and the team need to continue to adjust game by game.

“I have definitely been looking to shoot more from the outside,” Clifford said. “I have been focusing on that because, as teams scout us, they definitely see what everyone’s strengths are. It is important to be able to evolve from that and try to change up your games so teams have to be a little bit more on their toes. I think for me personally trying to shoot from the outside a little bit more, as well as trying to work on my half court game, has been big.”

Clifford is cognizant that the end of her college career is approaching and is already dreading having to say goodbye to her teammates.

“Definitely just being a part of a team has been great,” Clifford said. “I don’t think there is anything else quite like it with so many people working toward the same goals.”

During his tenure as team captain for Washington and Lee’s men;s swin team, Cole Schott, ’17, has taken his role as a multifaceted leader every seriously.

“As a captain, first and foremorest, you are a leader in and out of the pool,” Schott said. “You are leading practice in a way that sets an example for everyone else. You honor the necessity and the sanctity of practice with your effort and with your attitude. Out of the pool…you are a responsible teammate and you are setting an example as far as what the underclassmen can and cannot do to be successful in the pool and out

of the pool.” While Schott admits that he probably will not miss

5:30 a.m. practices after this year, he does love parts of his swimming routine.

“Eating as much as I want all the time is nice,” Schott said. “I am also definitely going to miss being on a team and being in the great shape that swimming gets you in. I will probably continue to swim at a rec- reational level, but there are a lot of benefits to being in the swimming routine and I am going to miss those a lot.”

In order to be successful at the college level, Schott has had to adjust both physically and mentally from his high school days.

“In high school, I was more of a distance swimmer,” Schott said. “As my college career has gone on, I have transitioned to shorter events, as I have gotten stronger and gained a little bit of muscle and weight. I definitely have a more mature and relaxed approach to swimming as a sport. I now worry less about my times and focus more on swimming with the right technique and doing everything in the pool technically correct. If you do that, the times will take care of themselves. It has definitely been a transition physically and mentally to a more mature approach to the sport as a whole.”

While Schott is happy about his individual development, his focus is entirely on team success.

“I am most excited about sending a lot of teammates to nationals, both individually and on relays,” Schott said. “It will be rewarding to me in these last four to five weeks to see everyone be as successful as possible and to see a lot of people qualify for NCAAs because, if that happens, this senior class has brought this team from a place where we didn’t send anyone to nationals my freshman year to a place where we are placing among the top 10 to 15 teams in the country. It would be a huge step forward in four years for this program.”