Reporters, professors discuss news and media in the “Age of Trump”

Three reporters, a journalism professor and a philosophy professor examined Trump’s relationship with the media in a panel last week 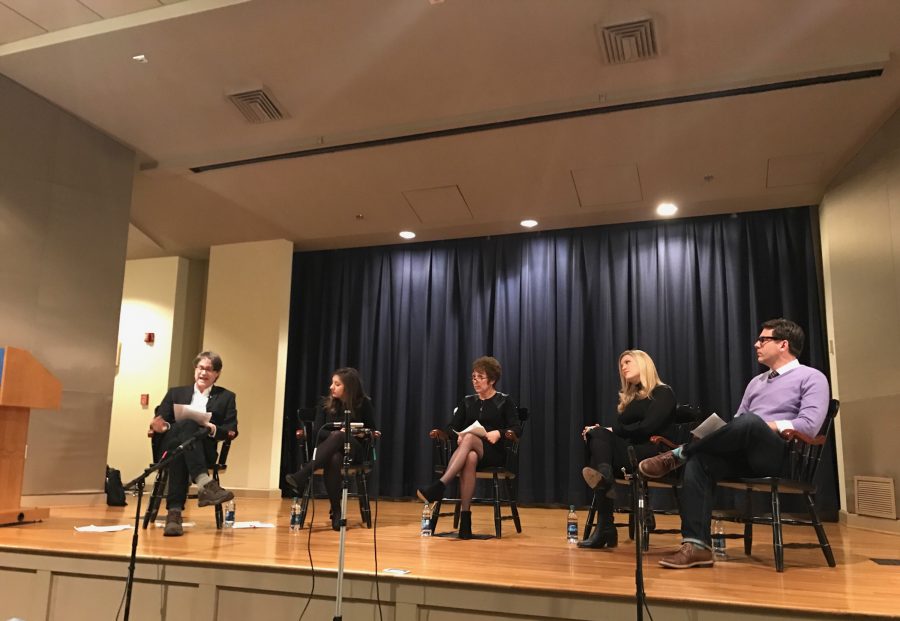 A panel of reporters and professors discussed journalism, fake news and President Trump on Thursday, and their messages were ones of challenge and growth.

To Hudson, Trump’s efforts to turn Americans against the media act as a tool that will refine journalists, instead of weakening them as Trump perhaps intends.

Rosie Gray, writer for The Atlantic, said Trump’s treatment of the media is a strategy to upset journalists and throw them into a frenzy.

“Donald Trump loves the media,” she said. “What he hates is reporting.”

She said that his administration talks to reporters too much for them to actually hate the media.

She experienced Trump’s hostility toward the press firsthand when she was black- listed from his campaign trail during the election. She said she would stand in line for his rallies and enter with the public, rather than with the press.

She said it was frightening at times. “People would really get in our faces in an aggressive sort of way,” she said. Trump’s strategy is to undermine trust in the press, said Hudson. But never has the

press and its purpose been more passionately debated than now. According to Hudson, Trump’s attempts to push the media away are not that effective because the good information is not what journalists are given, but the stuff they must dig for. Hudson also said that with the huge amount of information Trump has been producing, journalists need to be more willing to set the agenda for what is important rather than what is simply new, like his very active Twitter.

“It worries me that we are playing Donald Trump’s game,” Hudson said. “and not doing the kind of reporting we should be doing.”

An audience member pointed out that Trump has been able to point at fake news to undermine trust in the media.

Washington and Lee journalism professor Toni Locy said that news outlets can’t shut proponents of fake news down, so it is up to the consumer to pick out the trust- worthy sources from the rest.

W&L philosophy professor Paul Gregory reminded viewers that truth does actually exist–it’s just a matter of knowing you have it.

“We’re not dumb,” he said. “We need to be less lazy when looking at the informa
tion outlets we go to for news.”

Olivia Nuzzi, Washington correspondent for New York Magazine, said fake news is so prominent because it’s able to be created by anyone anywhere.

“It can feel like an epidemic,” she said. “We’re in the boom period. Anyone can make a website.”

She said that the definition of fake news has evolved. Originally, it was used to refer to news stories that were actually made up. Nuzzi calls these “hoaxes” instead. “Fake news is now a term that’s being applied across the board,” she said. “It’s

troubling the way the phrase has evolved.” She encouraged consumers to correct fake news when they see it. “Don’t give it more credit than it deserves,” she said.