Professor T.J. Tallie’s last class is a linguistic and cultural study of the Zulu people in southern Africa 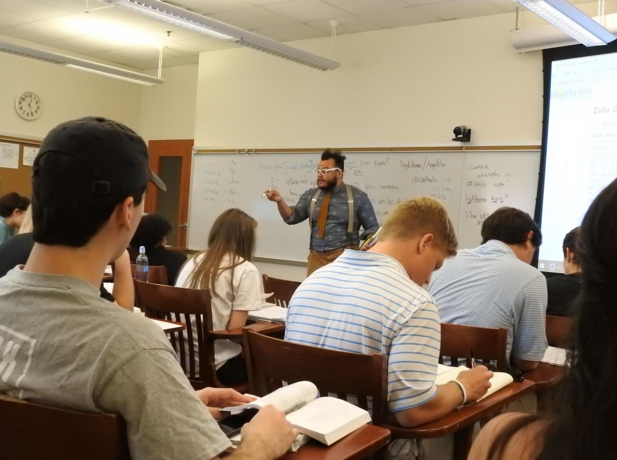 Professor T.J. Tallie is saying goodbye to Washington and Lee University after four years in the history department. He said that he is sad to leave but could not imagine a better way to end than with his spring term class.

“The class perfectly summarizes how I have always pushed my students to see the world in different ways,” Tallie said.

Tallie’s class is focused on the culture of the Zulu people, who live in southern Africa. Tallie said he hopes his students will grow to appreciate the culture throughout the term.

The students will spend the first two weeks of the class learning “isiZulu,” a language spoken by the Zulu people. Tallie said the class is structured to be as immersive as possible–with the students even taking on Zulu names.

The last two weeks of the class will be similar to an intensive history class, in which students will learn about the history of the Zulu people. Tallie said the class will examine various subjects such as colonialism, racial discrimination, gender, sexuality, music and film.

Tallie said the linguistic and history components are both necessary to begun to understand what it means to be and live as a Zulu individual.

“The class is called ‘Siyaphila,’ because the word means ‘we are living’,” Tallie said. “The students and myself for four weeks are trying to live in the Zulu culture.”

Throughout his academic career, Tallie has studied Southern African History, Gender and Sexuality and Settler Colonialism in the 19th Century.

At Washington and Lee University, he has taught broader courses, such as Global History and Modern African History, as well as specific courses, such as Africa in Western Imagination and Queering Colonialism.

Tallie said the students have been amazing throughout his time here, and he has loved their academic intelligence.

Tallie said his classes have probably been uncomfortable for some students, because he covers topics dealing with race, gender and sexuality. He said he takes these challenging concepts and tries to get his students to grapple with them while also trying to make it fun.

Olivia Hunter, ‘18, is one of Tallie’s advisees and has taken four classes with him throughout her time as a student. She said one of her favorite characteristics about Tallie is his witty commentary.

Hunter said she also found Tallie to be an amazing advisor as she navigated college. She said Tallie was always there with advice whenever she needed it but that he also let her handle things on her own.

Hunter said she is happy for Tallie but sad for the campus.

“There will be a gap left behind, because [Washington and Lee] needs a guy like Tallie,” she said. “The school needs professors like Tallie that push students to look at really hard topics.”

Hunter said Tallie has helped her succeed, and he tries to do the same for all his students.

Tallie is moving back to California, where he grew up, to be an assistant professor of African History at the University of San Diego. Tallie taught at a high school across the street from the university ten years ago, and he said he sees his teaching journey as coming back to where it started.

Tallie said he hopes to continue making an impact on students in California and will always cherish his time spent with at Washington and Lee.