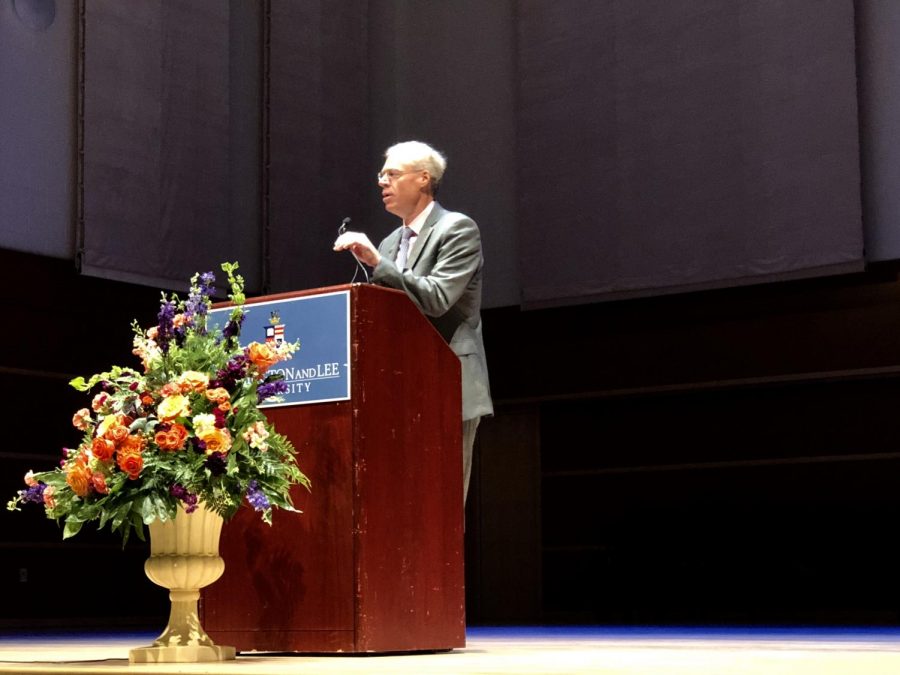 President Will Dudley delivered his annual Parents Weekend address this Saturday in Wilson Concert Hall, in an intentional move away from the tradition of holding the speech in Lee Chapel.

Dudley and the university decided to move the location for the address after a group of 12-15 students emailed him, expressing their concerns about holding the event in Lee Chapel. The group emailed Dudley in the evening of Sept. 20, and by the afternoon of Sept. 21, Dudley had consulted the Office of Student Affairs and decided to move the location out of Lee Chapel.

Sasha Edwards, ‘20, was part of the group of students that drafted the email to Dudley. She said the group of students gathered after experiencing a collective feeling of “disappointment” following the student forums earlier this term on the Commission on Institutional History and Community’s report and Dudley’s response to the report’s recommendations.

Edwards said the group particularly took issue with Dudley’s decisions about how to incorporate the use of Lee Chapel into university events moving forward.

“Essentially, [Dudley] said, ‘We need to reclaim Lee Chapel,’” Edwards said. “The problem we were having with this statement was: You can’t reclaim a space for a group of people whose space it never was in the first place.”

At the undergraduate student forum on Sept. 13, Dudley brought up the White House as an analogy for the concept of reclaiming space.

The Commission’s report contained an entire section devoted to the history and use of Lee Chapel. The report suggested converting the chapel into a museum, “which would serve as a teaching environment with a well-appointed classroom, offices and state-of-the-art exhibition space…The new University Museum would no longer hold any university functions.”

Dudley initially wrote in his response that the university would continue to utilize Lee Chapel for university events that are traditionally held in the space.

But he did leave some of those decisions to the student body. In his response, Dudley said the location of the Executive Committee’s honor system orientation, which is mandatory for all first-years, would be decided by the Executive Committee in keeping with the tradition of student government. Following tradition, the orientation was held in Lee Chapel this past O-Week.

Dudley defended the continued use of Lee Chapel in his response to the Commission’s report in August.

Edwards feels that this decision fails to take into account that for minority and marginalized students on campus, the space of Lee Chapel, which includes a portrait of Lee in his Confederate uniform and a recumbent statue of Lee, in addition to being situated above the Lee family crypt, has the potential to “induce trauma.”

“The change in the space is very slow, and it’s too slow to be like, ‘Oh, you can just work through it,’” Edwards said. “We don’t want to work through it.”

Another student who helped draft the email, Joelle Simeu, ‘20, agreed with Edwards. Simeu said she believes the university is at a moment in its history where administrators need to be willing to make “big splashes.”

“The way that I see President Dudley is as a philosopher who is frankly okay with inconclusive ideas,” Simeu said. “If it comes to the point where you need to make a splash in order for people to not feel like they’re burning, are you willing to do that? And to this day, I don’t think that Dudley is ready to make splashes.”

The group of students requesting a change of location for the Parents Weekend Address echoed the need to take a stand in their email to Dudley.

“We respectfully ask that you move your Parents and Family Weekend address from Lee Chapel to somewhere that connects us all without igniting significant trauma in a portion of the community. We believe that this would be a step toward proving that we are a community that cares for all its members,” the students wrote in the email to Dudley. “You have the power to heed the call and ensure that Washington and Lee University backs its words through actions.”

Edwards said she was pleasantly surprised by Dudley’s subsequent decision to move his address out of Lee Chapel.

“I was elated,” Edwards said. “We were really just going out on a limb, and most of us didn’t think that he was going to say yes, so when he did, we were just all really excited.”

Dudley has scheduled an in-person meeting for this week with the students who drafted the email, in an effort to better understand their view. Edwards says she hopes the conversation can turn to moving all university events out of Lee Chapel, as the Commission had recommended.

“I just know that there are students who are ready for the changes that were talked about in the Commission,” Edwards said. “And the fact that they were able to talk to people in the [Washington and Lee] community from all sides of each point and still come to the conclusions that they made says a lot about where this community wants to go and should go. We’re ready to fight for the Commission’s recommendations.”

Maya Lora, ‘20, contributed to this story