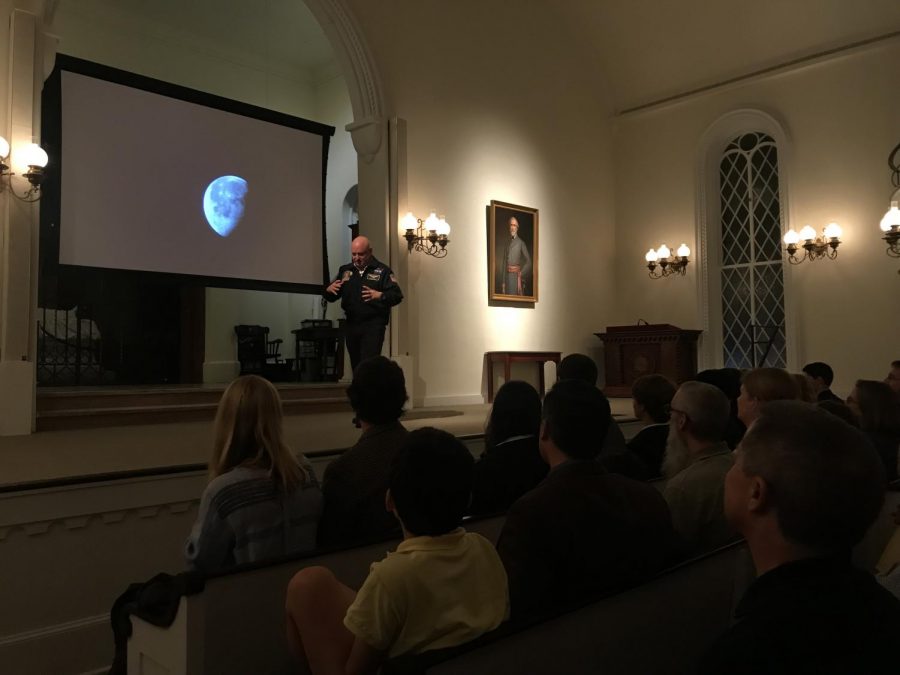 Captain Scott Kelly told a sold-out audience that he sees no reason to add Space Force as a sixth branch of the armed forces.

“Take the largest bureaucracy in our country and add another layer of bureaucracy?” Kelly said. “I don’t know that that’s going to be a great investment.”

Kelly also mentioned that the U.S. Air Force already handles most of the issues Space Force is supposedly being formed to address, including protecting American assets in space.

“Now having said that, if they get lightsabers? I’m in,” Kelly said, encouraging one of many laughs from the audience he drew out that night.

Kelly spoke to students, professors, parents and even some younger children in Lee Chapel on Thursday night. He was invited to campus by the Contact Committee, which even created a Snapchat filter to celebrate the event.

Kelly, a seasoned astronaut, is best known for the hardest mission of his life, during which he spent a year in space on the International Space Station.

The purpose of the mission was to study long-term effects of space dwelling on the human body, which is made to survive in gravity. Kelly’s identical twin brother, Mark Kelly, was used as a control subject so that scientists would be able to measure exact effects of space on Scott Kelly’s body.

Kelly said missions like his are essential as the space community continues to try to put an astronaut on Mars.

“It’s not easy to spend a year in space; it’s a hard thing to do,” Kelly said. “It was about having a goal and a plan. It was about taking risk, being

willing to make mistakes, and at times, being willing to fail.”

Kelly expanded on his journey from a distracted teenager who struggled to focus on his school work to one of the best known names in space travel. He delivered an elaborate presentation with photographs of his family and best memories tied to each anecdote, lulling the audience into an engaging narrative for nearly an hour.

For example, Kelly told a story about how he and his brother interviewed for NASA only a few months apart, and because his brother went first and had borrowed his suit, both Kellys interviewed in the same outfit.

Kelly joked that he bets he has the only suit selected to work for NASA twice, as a picture of him and his brother in matching outfits as toddlers was projected behind him.

While Kelly kept the overall tone of his presentation light, he also touched on more serious topics.

He encouraged the audience to remember to take care of the Earth and spoke to the changing effects pollution has caused that he could see from above in space.

During the Q&A, Kelly used his personal experience and institutional knowledge acquired while working with NASA to address national topics of conversation. He spoke out against the possible privatization of the International Space Station (ISS), which served as his home for over eleven months. He said that since private companies want returns on their investment, the ISS would be far from an ideal pet project.

Bouncing around Congress is the idea to move the ISS to a private system rather than keeping it federally funded. Sen. Ted Cruz (R-TX) and Sen. Bill Nelson (D-FL), who held a hearing on the matter over the summer and come from two states heavily invested in space programs, are both opposed to the idea.

“The best experiment of the space station is the fact that we had people in space for the past 20 years,” Kelly said. “You know these kids probably don’t realize they’ve never been on Earth with every person. You know, since 2000, the last 18 years, there’s always been somebody in space.”