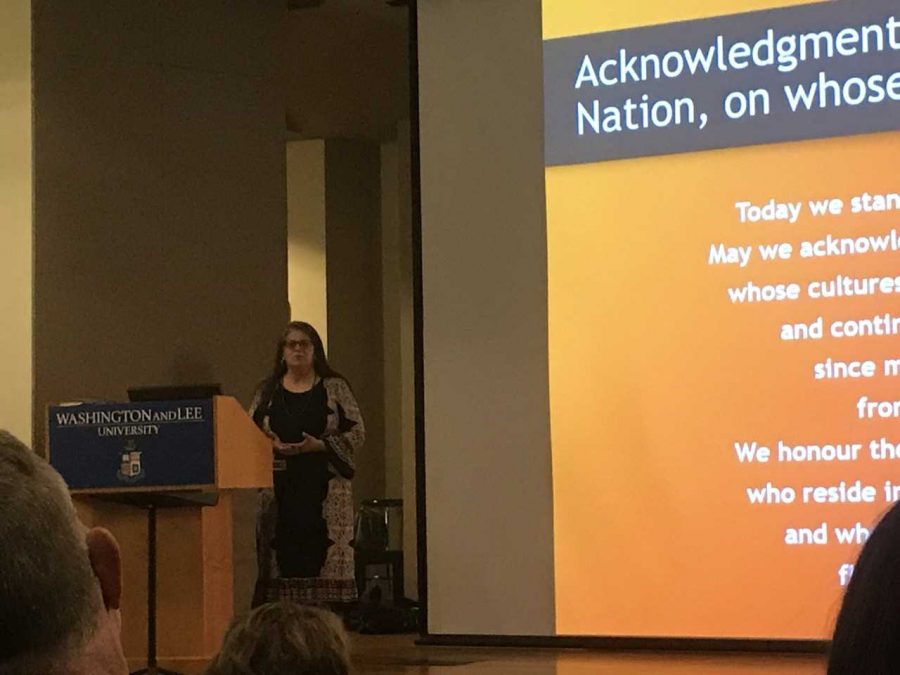 When English Professor Deborah Miranda started researching her family’s history, she was told she wouldn’t find enough archives to write a book.

But that didn’t hold her back.

In 2013, she published Bad Indians: A Tribal Memoir, in which she intertwines the roots of the Ohlone Costanoan Esselen Nation of California with her own family’s history.

Miranda spoke about her book and experiences at a talk entitled, “Using the Colonizer’s Language,” on Nov. 8 in Stackhouse Theater. She kicked off the Office of Inclusion and Engagement- sponsored celebration of Native American Heritage Month during November.

How does she tell the stories of her ancestors? By “reinventing the colonizer’s language.”

While writing her book, Miranda said she found small pieces of Native American history embedded within the historical archives otherwise dominated by the narratives of white settlers.

“I visualized my materials like a mosaic, which can seem like it’s broken, like our people our broken,” she said. “But the thing about a mosaic is that it loves broken pieces.”

In addition to the lecture, the Office of Inclusion and Engagement sponsored a display of Native American heritage, as told through literature, on the main floor of Leyburn Library.

“Story is the most powerful force in our world, maybe in all worlds,” Miranda said. “Story is culture.”

Ella Powers, ‘22, said she sees a link between the lack of representation of Native Americans on campus and how it’s celebrated.

However, Powers also commented that it is difficult to celebrate as a whole because of the diversity among Native American communities.

“It’s also not one culture,” she said. “It’s a very broad term covering multiple tribes and ways of life.”

Judy Parks, ‘22, attended Miranda’s lecture and said she wished more could be done.

“I appreciate that we’re taking time to recognize Native Americans,” Parks said. “I hope in the future we can do more than have a month for them.”