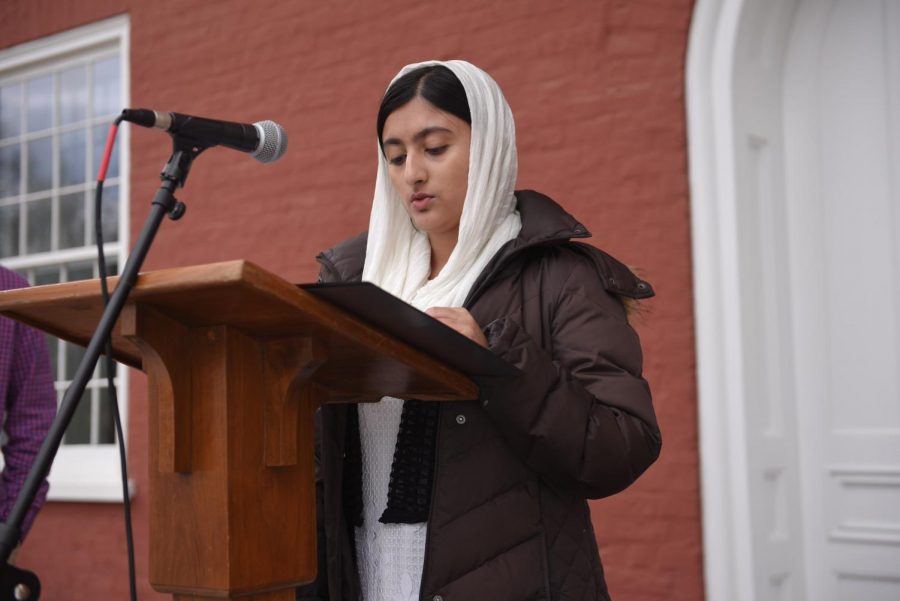 Sawera Khan, '21, speaks at the vigil. Photo by Maya Lora

About 200 members of the Washington and Lee and Lexington community gathered on the Colonnade to unite against Islamophobia one week after the mosque shootings in New Zealand.

Amnesty International organized the vigil on Friday, March 22 in remembrance of the 51 lives lost in the mosque attacks in Christchurch, New Zealand. The organization tabled in Elrod Commons all week to collect signatures on a banner, where students pledged to “stand against Islamophobia.” The banner hung on the Colonnade for the duration of the vigil.

Mohamed Kamara, the professor of French and Africana Studies who leads Muslim student life, opened the ceremony with a prayer and moment of silence.

Sawera Khan, ‘21, spoke about her fear as a Muslim woman to wear a hijab. Khan said she woke up the day of the attack feeling lucky to be an American until she read the news. She also shared her thoughts on New Zealand’s ban on assault weapons following the shooting.

“I am both elated and heartbroken because I know that that will never happen here,” Khan said.

A number of student organizations were present at the event, and representatives from several faith-based organizations also spoke, including Hillel, Reformed University Fellowship (RUF), Catholic Campus Ministry (CCM) and InterVarsity.

Adit Ahmed, ‘19, closed the ceremony with remarks about the importance of uniting to fight against the evil in this world.

“On campus, I hope that this is a moment of visibility for the Muslim community,” Ahmed said after the event. “I hope that people know that they have Muslim brothers and sisters here on campus… knowing that there’s a community to support and engage in.”

Those in attendance received a candle or white ribbon upon their arrival. At the end of the ceremony, participants tied them on a string stretched across the walkway in front of the Colonnade.

“I think this is a good time for the community to come together, because everyone is affected by this whether they understand it or not,” said Amnesty member Mansi Tripathi, ’22. “In a perfect world every single student would’ve come, but that’s not possible and it’s okay because we still have a strong community.”

Unity and community were two important reasons for the vigil, in addition to raising awareness for religiously-motivated terrorist attacks and the devastating effects they have.

“I always think that it takes… a big disaster or tragedy like this for people to start paying attention,” Tripathi said. “Islamophobia exists every day, and not always in violent acts, so I hope that leaving today, people are more aware of the little things they do that could perpetuate it.”