The University Jazz Ensemble and Vosbein Magee Big Band will share the stage on Thursday, Nov. 21 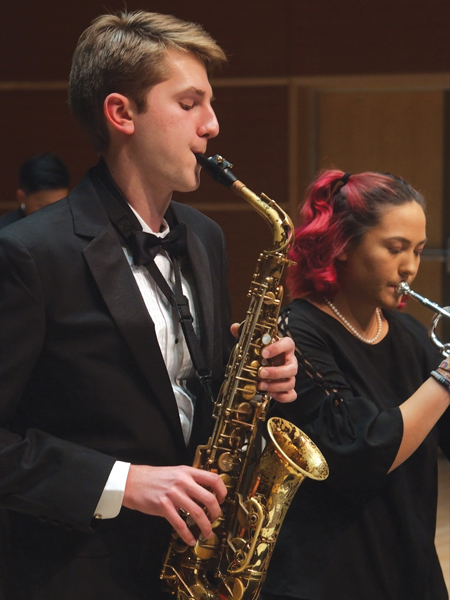 Left to right: Truman Chancy, ‘22, and Leslie Sparling, ‘22, perform with the jazz ensemble. Photo courtesy of the Lenfest Center for the Arts.

When Terry Vosbein started teaching in Washington and Lee’s music department 24 years ago, he took on a project: reviving the long-defunct jazz program.

The band has been playing ever since, although never in the traditional big band format. The ensemble has always included unique instrumentation, sometimes featuring two pianists, and even a cello. Vosbein, however, views this as a strength.

Vosbein motioned to cabinets along a wall in his office in Wilson Hall.

“We’re surrounded by these file cabinets full of arrangements for big bands,” he said. “I have to write or rewrite every note of every tune we play. The upside is that I can really focus on and feature specific players.”

Those players, like alto saxophonist Truman Chancy, ’22, appreciate the unique qualities of the ensemble.

“It allows us to feature different students,” Chancy said. “That really allows those musicians to shine through.”

The ensemble is currently preparing for their fall concert, which also features The Vosbein Magee Big Band, a professional big band in residence at Washington and Lee. Vosbein, who serves as the band’s music director, welcomes the opportunity for the two bands to intersect. Although the two bands don’t play a set together, Vosbein paved a way for them to share the stage.

“The tradition is that the seniors from the student band get to solo with the professional band,” Vosbein said.

Leslie Sparling, ‘22, who plays trumpet in the ensemble, views playing back to back with a professional band as an educational opportunity.

“Last year I was the only trumpet [in the jazz ensemble],” Sparling said. “It’s really cool that we get to watch the Vosbein Magee Big Band because they have these awesome trumpet players.”

Vosbein also sees the value of bringing in a professional band to a town that isn’t necessarily known for its jazz scene.

“The students love it because they get to hear a band of that level,” he said. “They get to interact with and solo with that band, as well as being on the same stage as them.”

The University Jazz Ensemble and The Vosbein Magee Big Band are playing their fall concert on Thursday, Nov. 21 at 8 p.m. in the Lenfest Center’s Wilson Concert Hall. Tickets are not required.

“It’s really an exciting environment,” Sparling said. “It’s not as formal as some other concerts might be, so you should come prepared to have fun: tapping your feet, clapping, and maybe a little dancing.”

Vosbein cites the comparative value of the concert, which is free to attend.

“We bring in, both externally and home-grown, a lot of talented people here, that, if you were living in New York City you’d pay 50 to 500 bucks a seat to see,” Vosbein said.