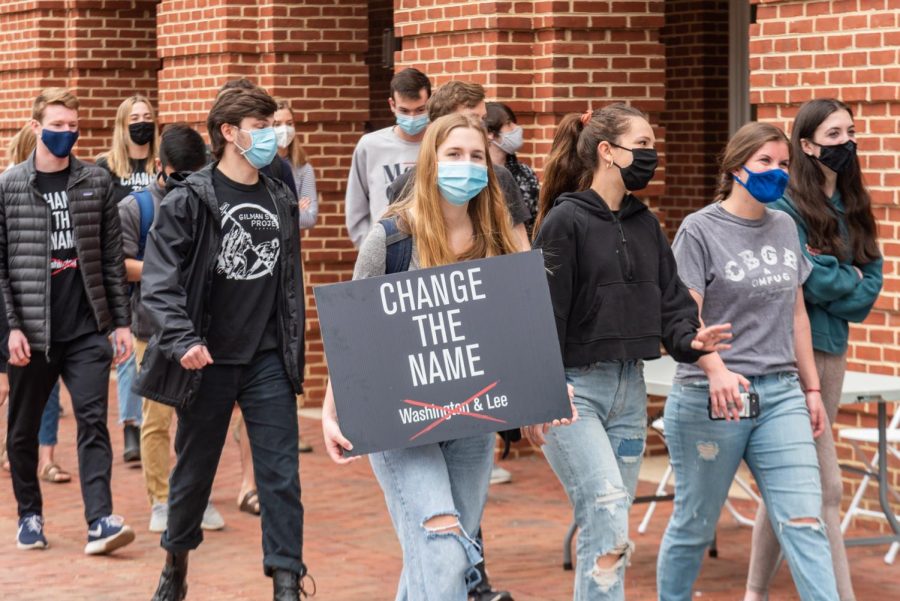 A crowd of undergraduates, law students and faculty members marched from Canaan Green to the Colonnade March 23 to protest the university’s name.

“We are named after two slave owners; those people have earned their places in our history books but not on the name of our school,” Skyler Zunk, a law student, said.

The gathering was organized in response to the Board of Trustees’ postponement of making a decision about renaming Washington and Lee. Students were encouraged to walk out of class in protest to attend the event.

“We want [the Board of Trustees] to realize that pushing it off is not going to make us forget, even if they try to push it off to the summer when no one is on campus,” Otice Carder, ‘23, one of the event organizers, said.

Participants stood on the colonnade as six students spoke in front of Lee Chapel, next to a sign that read “Who built this colonnade.”

Amber Morrison, ‘23, one of the speakers, said that the administration moved mountains when students and parents affiliated with Greek life were unhappy about recruitment postponement. But the board has not done the same for marginalized students, she said.

“The only language the W&L administration speaks is dollars. And sadly, that is a language that brown kids have been barred from learning for years,” Morrison said.

Tahri Phillips, ‘23, another speaker said being a university ambassador of color is one of the hardest things she’s ever done. She said she wanted to assure prospective students who look like her that there is a space for them on Washington and Lee’s campus.

“When a prospective student of color asks me ‘what made you choose to come to a school named after Lee?’ in my head I’m asking myself, how do I justify my choice to come to a school that glorifies a man who fought for the continued enslavement of my ancestors?” Phillips said.

She said she ends up telling them that the academic, financial and professional opportunities outweighed the name.

“I’m disappointed with myself, because although I haven’t lied to them, it doesn’t feel like I’ve been truthful either,” Phillips said.

“W&L is a great school. It has so much to offer. But it’s held back by these invisible strings,” she said. “Strings that you, the board, control.”

Enuma Anekwe-Desince, ‘22, a fourth speaker, said it is unfathomable that Washington and Lee, a school that is struggling to attain and maintian diversity, is still venerating a confederate general.

“Idolizing Robert E. Lee and wanting to increase the number of Black students on your campus is irreconcilable,” Anekwe-Desince said. “I am eternally grateful for the opportunities that this school has provided me. But I won’t act like it hasn’t come at a cost.”

“Clinging to a divisive idol such as Lee will curtail prospective students while simultaneously alienating students, alumni and faculty who feel that Lee doesn’t represent them or their goals,” she said.

She also said she recognizes the exceptional opportunities that the university provides.

“I argue that the univeristy’s divisive identity will diminish what makes it extraordinary,” Evans said.

The final speaker, Blake Ramsey, ‘23, said the school is defined by the students and staff that compose it today, not by Lee.

“Why then must we honor Robert E. Lee if [the board] fails to honor us?” he said.

After over an hour, the assembly concluded.

Carder said there was ample support from faculty and alumni in regard to funding and vocal support for the event. The funds collected from alumni went toward distributing masks and custom T-shirts which read “Change the name.”

Faculty members present were vocal about their disapprovement of the name.

“I think it is time for a name change,” said David Eggert, a professor at the law school.

Religion professor Emily Filler said, “I would be perfectly happy to change the name. I feel fine saying this as a junior professor at this University.”

She also said she wanted to support the students and would not penalize those missed class in order to participate in the event.

Several hundred students attended the outdoor event, even though gatherings are limited to 10 people, indoors and out, according to the COVID-19 Committee environment guidelines.

Anjeli Hoskins, ‘22, who attended and helped organize the event, said she was “extremely concerned” about the lack of social distancing.

“I only have half my vaccine,” Hoskins said. “I will not be wearing the masks provided. I am going to keep wearing my KN95 mask and try to say away from people. Hoepfully everyone keeps their mask on.”

But students who attended, like Emily Matthews, ‘22, said it participating in the event was important.

“I feel like it’s the right thing to do to help the communities on our campus that are directly impacted by the name of the school,” Matthews said. “Mental health wise, the feeling of safety and comfort on campus is really important.”

Carder encouraged every participant to email President Will Dudley and the Board of Trustees to call for an immediate meeting to deliberate the name change.

Hoskins said she’s not sure what the result of the event will be.

“I know it might not have a huge impact, but I do hope it helps make the conversation more apparent and less hidden,” she said.

But the organizers of the walkout are more certain, saying they have more in store for the Board of Trustees.

“A faculty protest might be in the works if a meeting is not called this week,” Carder said.