Chantal Bilodeau talks about storytelling and how to make a difference 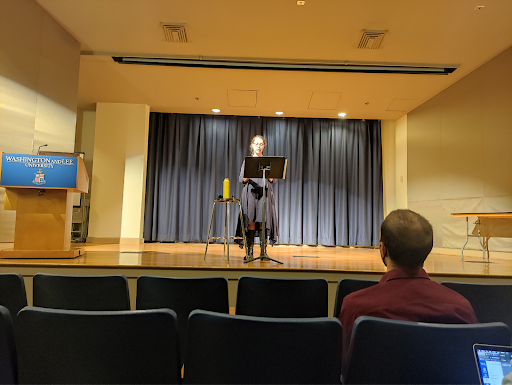 On Nov. 11, Chantal Bilodeau visited Washington and Lee as the fourth and final guest of the Mudd Center’s Daily Ethics Series this fall.

The Canadian artist is an award-winning playwright and translator whose works have been published in a dozen countries all over the world.

This combination of global events happens every two years under a different title, and it is running right now under the topic “Imagining a New Green Deal.”

The last showcase of the series will occur in December 2021.

Karla Murdock, director of the Mudd Center for Ethics and professor of cognitive and behavioral science, introduced the speaker and explained the goal of the lecture series.

“The Daily Ethics Series is designed to stimulate intersection and discussion of how the values that are most important to us are manifested, or ought to be manifested, as we live our lives every day,” she said. “Chantal Bilodeau uses theater to foster dialogue about our global climate crisis, creates an empowering vision of the future, and inspires people to take action.”

Like many other guest speakers who have spoken at Washington and Lee this fall, Bilodeau started her lecture with gratitude for being together in person again.

“The fact that we can be here in the same room together feels almost revolutionary. I use the word revolutionary because my field is live performance,” she said. “Essentially, I come up with ways to gather people together in a room and I introduce them to exploring what it means to be human.”

Bilodeau said her fascination with storytelling began when she realized stories bond communities and teach us to listen, and even shape reality.

After receiving her MFA in playwriting, she traveled the globe and suddenly felt “impactless” in a world full of problems she could not solve.

“And by having impact, I don’t mean being famous or even recognition,” Bilodeau said. “I mean feeling like I am contributing. Like I am doing my part and not just sailing through life taking the best and ignoring the worst.”

For that reason, she started “Arctic Cycle,” a series of eight plays about the climate crisis, in 2009.

Each play is dedicated to one of the countries bordering the Arctic Circle, where the impact of climate change is undeniable. The first play is set in her home country Canada, followed by Norway and the US. Other countries that will follow include Greenland, Iceland, Finland, Sweden and Russia.

During the writing process, Bilodeau said she realized that the Aristotelian structure, a traditional linear strategy of storytelling, wouldn’t work because it represents just one perspective. Bilodeau said she refused to focus on one protagonist, using a cubist approach of interconnectedness and multiple points of view to tell the story of many different individuals and even animals.

“Because of how our brains respond to stories when we watch a play, we are essentially rehearsing for life. On a neurological level, we are going through the ups and downs of a character’s journey, experiencing the consequences of their actions, just as if it was happening to us in real life,” Bilodeau said. “We are trying out different world views and seeing which one fits best. We are practicing being human in a big transitional moment in time, when we need to relearn a lot of what we thought we already knew.”