Senior housing, a Williams School expansion and a new museum on Lee Avenue are planned for the coming years. 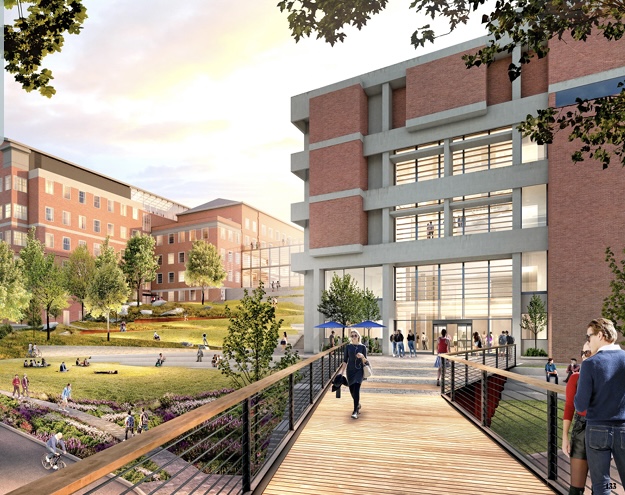 Washington and Lee’s back campus and West Washington Street will see significant changes in the next few years, according to the university’s master plan.

University Facilities Director Tom Kalasky presented the most recent version of the master plan to faculty, staff and other members of the community March 15.

The university master plan charts a vision of facilities expansion and development over a decade. The current master plan was developed over two years between 2018 and 2020.

On West Washington Street, Kalasky said the university wants to create a stronger “sense of arrival” for people setting foot on campus.

The stretch of West Washington Street between Gaines Hall and the loading tunnel will become one-way to discourage through traffic. Meanwhile, the university has planned wider sidewalks and bike lanes to make the street more pedestrian-friendly.

Multiple new buildings are planned along Washington Street. Early-Fielding will be demolished and become the new Admission and Financial Center.

The demolition of Early-Fielding will displace several campus services, including the Student Health Center and the counseling center. Those offices will be relocated in a separate, yet-to-be-determined building, Kalasky said.

Davis Hall will also be torn down and replaced with an expansion of the Williams School. The expansion will break ground in summer 2023 and finish in summer 2025.

Evans Hall will remain as an event space, while Baker Hall will continue to function as “spillover housing,” Kalasky said.

“Our hope is to not have to utilize Baker,” he said. “We have it on reserve so we can if it’s required.”

The Casa Hispanica program will work with the provost and other university leaders to find a new space on campus, Kalasky said.

The master plan has also proposed significant development in the university’s back campus, including optional senior housing.

The university recently presented a master plan amendment to Lexington’s Planning Commission that would convert property between the intersection of McLaughlin, Nelson and Glasgow streets, known as the McLaughlin triangle, into senior housing.

That proposal was met with condemnation from the Lexington community. In response to public concerns, the rezoning proposal was taken off the table.

The city of Lexington must sign off on any amendments to Washington and Lee’s master plan.

Now, the university has identified two alternative spots for senior housing in back campus, one near the turf field on Augusta Square and another in the pine woods east of the law school.

Kalasky said the university has estimated a need for 96 to 100 beds for fourth-year residential living. Both potential sites “capitalize” on the amenities already offered near third-year housing, such as Foodside and Fieldside, Kalasky said.

In addition to senior housing, development along Woods Creek is part of the university’s push for more mobility between different parts of campus.

“[Woods Creek] kind of stitches the front and back campus together,” Kalasky said. “Part of [having increased] mobility is we need to get across Woods Creek while respecting the environment there.”

An additional bridge stretching from the back of Leyburn Library to the Woods Creek apartments has been mapped out. The bridge would have a “much lower profile” and be about half the height of the concrete arch bridge linking third-year housing to the rest of campus, Kalasky said.

“The solar rays we do have on campus have been successful,” she said. “The question is, how do we scale that up in a way that makes sense with the campus and keeps us within the parameters of regulated utility laws?”

Kalasky emphasized during his presentation that the master plan is intended to be adaptable.

“These plans, they have some conceptual strategies, but as we develop them, things will change,” he said.