It’s been 11 years since W&L’s AKA Chapter was established, but it still feels like a secret 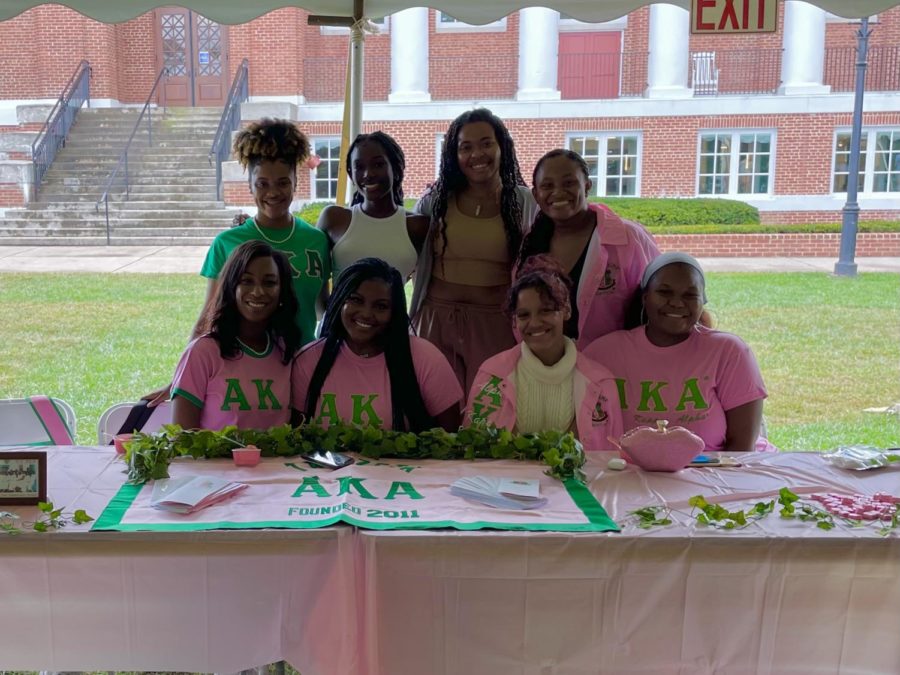 W&L's AKA chapter has been around for 11 years. Photo courtesy of AKA.

Tammy Futrell remembers exactly where she was 11 years ago when she received some of the most exhilarating news in her career at Washington and Lee University.

“I was eating dinner when I got the email saying we were approved,” Futrell recalls. “I jumped up from the table and ran out D-hall screaming and jumped for joy.”

Futrell’s email cemented the establishment of the Tau Zeta Chapter of Alpha Kappa Alpha Sorority, a historically Black Greek organization, at Washington and Lee. Like its original founders over a century ago, the initial AKA women at W&L struggled profusely to establish themselves in an environment essentially overlooking their existence. A decade since its formation, the Tau Zeta women of AKA maintain their battle for visibility in hopes of reshaping the historically homogenous Greek culture at W&L.

Greek life constitutes a major role at Washington and Lee, as 74% of students are affiliated with an organization. However, this experience is different for many students due to the school’s lack of historically Black Greek Letter Organizations. Out of the nine BGLOs within the National Pan-Hellenic Council, only AKA has active membership on campus. The remaining active Greek organizations are part of the National Panhellenic Conference, Interfraternity Council, or are locally operated.

As the organization’s graduate advisor, Futrell, dean of diversity, inclusion and student engagement at W&L, helped start the Tau Zeta chapter. Sitting in her office, adorned with salmon pink and apple green AKA paraphernalia, Futrell remembers the early challenges of forming the chapter.

“When I first came to W&L there were a lot of women who were interested in creating a chapter, but you need to have 12 members in order to start one,” Futrell said. “For a couple of years, there were general members who joined the sorority but didn’t have a specific chapter.”

During the 2010-2011 school year, Dean Futrell found her 12 necessary sorors. Despite finally establishing the chapter, Alpha Kappa Alpha experienced an uphill battle in growing the organization.

“There were a couple of years where there weren’t any members in the chapter at all,” Futrell said. “Nine, last year, was the highest number we’ve had since establishing the chapter in 2011 and currently there’s eight.”

“Black Greek life is not the dominant culture on campus,” Tyler said. “We don’t have a strong Black presence on W&L’s campus because there is no strong Black population in the first place.”

Sophomore Katelyn Gamble would’ve been a legacy AKA had she joined W&L’s chapter, but decided to pledge with Kappa Alpha Theta. Much of her decision stems from Theta’s superior reputation on campus.

“If I went to a state school, I would’ve been an AKA, but a lot of the defining characteristics of being in a Black sorority are taken away here,” Gamble said. “I wanted to be a part of a sorority that has a bigger presence on campus.”

The lack of BGLOs also alienates some students from the rush process altogether.

“I feel like I was lied to because the school advertised that there was an AKA and a Delta charter here, but when I came there weren’t any people in the Delta sorority,” Hoskins said.

Hoskins was told that if she was interested in starting a Delta chapter, she’d need a sponsor and prospective members, neither of which were at W&L.

“It’s discouraging because my family wanted me to join because they were Deltas too,” she said. “It was frustrating for a while but then I just had to get over it.”

Dean Futrell fears losing the chapters for the Black organizations on campus because “there’s just not enough interest.”

“We need to make sure Black organizations are a part of our normal conversation when discussing Greek life,” she said.

“Our organizations are at the forefront of every vital social movement,” Futrell said. “When George Floyd was murdered, you heard from Black Greeks first.”

Tyler, the AKA sophomore, acknowledges the pressure of being the only BGLO at W&L.

“It’s a lot of work because we have an image and legacy to uphold for the incoming Black students to show them they have options,” she said. “People need options and when you don’t have them it makes it harder for us because we have to overcompensate.”

The AKA chapter at W&L transcends its counterparts by emphasizing hands-on community service. This school year, sorors personally gave thank you notes to local healthcare workers, held a shoe drive for the less fortunate and delivered handmade clothing to disadvantaged children in Haiti.

Tyler says AKA provided her with a “multifaceted” experience that she doesn’t get from other organizations. The chapter has initiatives ranging from childhood hunger to economic literacy, while hosting events aimed at mitigating poverty and environmental damage.

AKA has also provided its members a much-needed outlet on campus.

“Last year I didn’t have any Black friends which was isolating because the way I wanted to be understood was hard to find here,” sophomore soror Naija Barakat said. “Now I have a group of Black women in my corner all the time who are there for me.”

The Tau Zeta women also find a stronger sense of community through their bi-monthly visits with the BGLOs at James Madison University. Sophomore Taylor Graham recalls witnessing a step show at JMU, a staple within Black Greek life.

“I’ve never had that type of experience at W&L,” Graham said.  “We don’t get that here and it’s the culture we’re missing.”

“I hate it because when we went to JMU for the probate it was amazing to see everyone come out in their colors,” Graham continued. “When I walk around in my colors here I feel like I stand out and not a good way.”

AKA has a comparatively more discreet recruiting process which many believe inhibits its growth on campus.

“It’s a very lowkey, secretive process and you have to go out of your way to show interest in the AKAs,” Gamble said. “Meanwhile, the Panhellenic sororities here come and show interest in you.”

Tyler says AKA and other BGLOs view discretion in the recruitment process as a fundamental value.

“You keep it to yourself because it’s really special to you,” Tyler said.  “We don’t go out seeking people because they’re Black and want our presence to grow.”

Dean Futrell recognizes AKA “is not for everybody” and believes maintaining AKA’s core principles will attract its desired sorors.

“Visibility and authenticity will attract the women that are supposed to be a part of us,” she said.