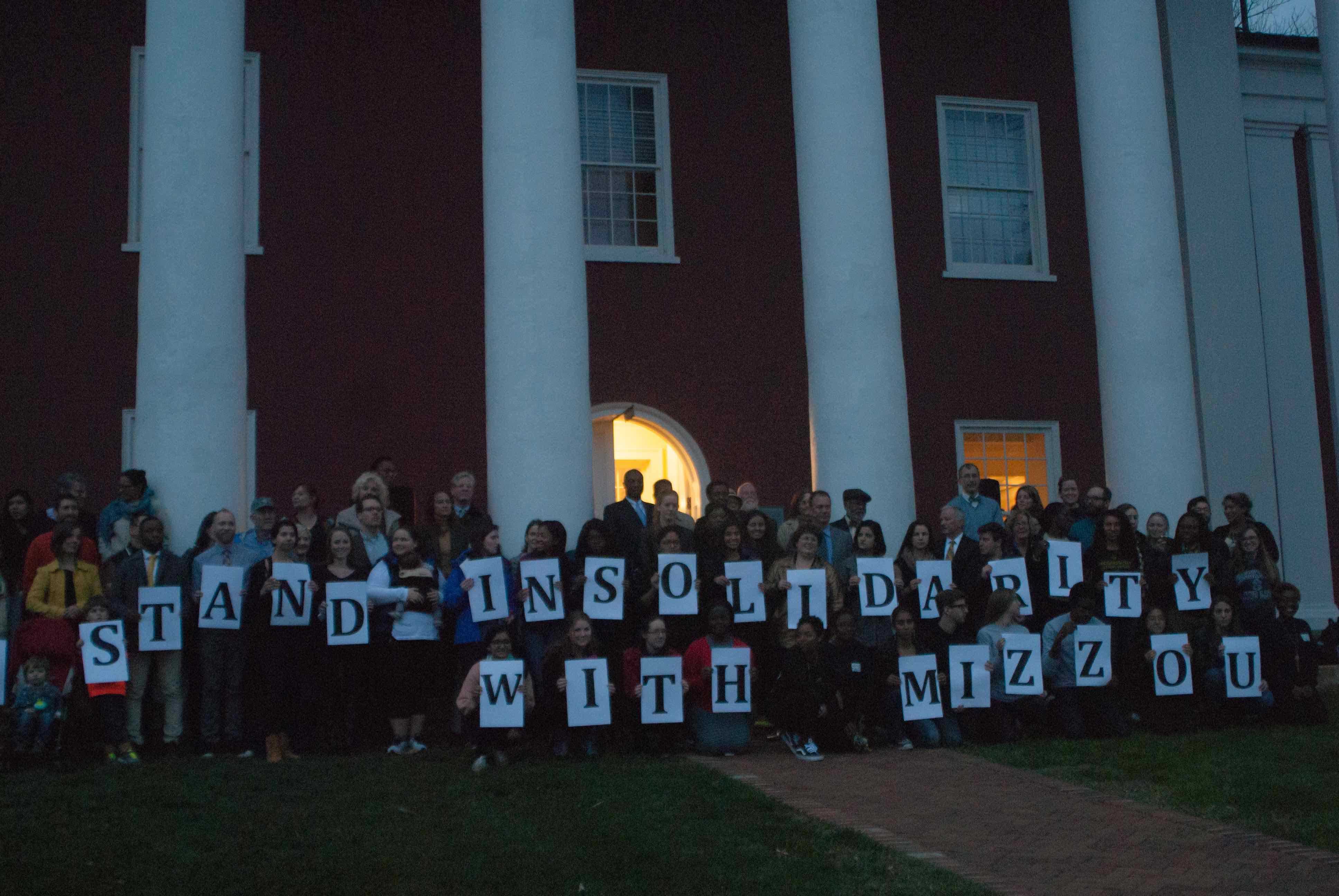 As dusk fell on the Colonnade Wednesday evening, MaKayla Lorick, ’19, was poised between two columns, a microphone in front of her.

“During my first few weeks [at Washington and Lee], I felt on edge. I remember a student coming up to me, sniffing my hair, and telling me that it smelled weird. And, to justify this, he said whenever something was different, it was weird,” Lorick said.

Dozens of students and faculty gathered on Washington & Lee’s Colonnade in support of protests that originated at the University of Missouri as early as September. There, Mizzou students, and subsequently students on other college campuses, have raised concerns about incidences of racism.

These incidents, Lorick said, present an opportunity for W&L students to talk about the experience of black students at their own university.

“It is no secret at Washington and Lee that African-Americans, both students and faculty, are extremely small in number,” she said. “Having said this, while attending a predominately white institution named after two former slave-owners, we find that it is imperative for black students find security, presence and a sense of space here.”

Ijezie Ikwuezunma, ’16, stood before the crowd as it grew to about 100 people, though nearly half left before the end of the rally. Ikwuezunma called for students and faculty to “take care of our own home [sic] before we set out to place any judgment on another institution.”

“In the absence of black students and faculty, yet the preponderance of statements like, ‘Do you play a sport here?’ or ‘You’re only here because of affirmative action,’ I find myself doubting whether or not I’m worthy to attend this university, and even in questioning my own position within this community,” Ikwuezunma said.

Ikwuezunma also spoke about W&L’s history and the oppression it entails.

Professor Deborah Miranda, who identifies as Native American, was the final speaker of the night.

Sharing a story about her first days as a W&L professor, Miranda recalled an incident in which she, an African-American professor and a Chinese-American professor, were stopped at a Dean’s lunch for new faculty and told by a staff member, “I’m sorry, this luncheon is only for faculty.”

Miranda said students should make their voices heard and should urge for a more diverse faculty.

“Go and speak to the administrators—write them emails, talk to them about how you feel about not seeing yourself represented in the professors that are here at Washington and Lee,” she said.

Miranda ended the night by celebrating the courage of those who spoke.

“I am in complete admiration for the students who are here and the students who have spoken up,” she said. “That takes a tremendous amount of courage, I want to tell you, it took me this whole evening to get up the courage to come up and talk to you.”

“I admire and respect the students for bringing this together,” he said. “I think it will advance Washington and Lee in the future.”