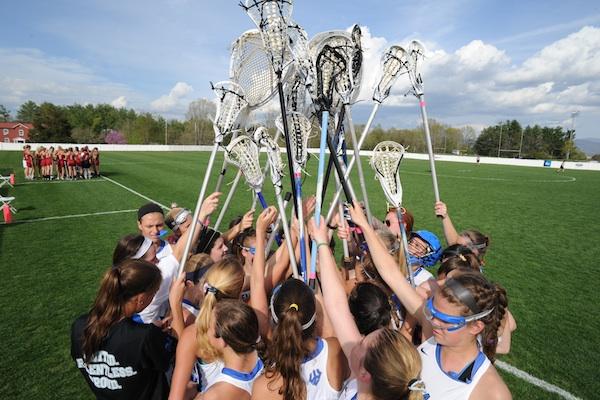 Recruiting: A Different Story at a Division III School

According to coaches, academics and admission trumps over their influence in prospective athletes.

When Olivia Sisson, ‘17, was in high school, she knew she wanted to play lacrosse in college and that she was interested in Washington and Lee University. She started to get offers from colleges, but wouldn’t hear back from W&L until her junior year.

She had to decide if she wanted to accept one of her other offers or wait to see if she could get into W&L.

For athletes like Sisson and the coaches currently looking to recruit future generals, W&L’s admissions process can be a challenge.

While larger and less selective universities can contact thousands of prospective athletes regardless of high school grade point average or test scores, W&L can only recruit athletes who will meet the high academic standards set by the university. Athletic Director Jan Hathorn said the department cannot promise admission to prospective athletes.

Hathorn said that she works closely with Dean of Admissions William Hartog in order to review admissibility of possible athletes.

But when it comes down to academics versus admissions, academics come first.

“The final say always come from the admissions office,” Hathorn said. “There’s always that student athlete or two who you think are the best for your program, and they just don’t gain admission.”

Women’s Cross Country Coach Michael Dager is experiencing his first round of recruiting as a new coach for the team.

Dager said he came from a less selective university where he could send upwards of 2,000 interest letters to athletes regardless of academic ability. But W&L’s admissibility standards are different than his former post’s.

A challenge for the positive

Hathorn said that most future athletes show interest in the school without coaches seeking them out.

“One way we recruit is by responding to those young men and women who contact us first,” Hathorn said.

Hathorn said that many prospective Generals have heard the widespread positive reputation of the school and show interest because they want to continue their sport while gaining a liberal arts degree at one of the nation’s top small universities.

“Many coaches also attend tournaments or camps or clinics or events where prospective student athletes are participating,” Hathorn said.

Dager said if the interest to compete as a General is still strong after a few months, the prospective athlete will visit campus. After an initial visit consisting of a tour and information session, the individual may be invited back for an overnight visit.

Head Men’s Cross Country Coach Brandon Spalding, who is in his second year at Washington and Lee, agreed.

“We always have decent interest because of the school we are,” Spalding said.

Spalding said he has never worked with admissions to get prospective athletes accepted.

“Admissions is doing their job and we’re doing ours,” Spalding said.

Hathorn did not hesitate to express that academics always come first.

“From a coach’s perspective, [academic ability] plays an equal role with their [athletic] abilities, as far as their skills or their talents,” Hathorn said. “It really is first and foremost the one…factor that determines someone’s admissibility.”

Spalding said his team had about a 3.4 cumulative GPA last year. He said he takes care of training plans and other logistics so that his athletes can focus on school work and successful athletic performance.

Dager’s athletes must maintain the high academic standards set forth by the university in addition to running 50 miles each week.

“There is some concern, because of academic rigor, in balancing things,” Dager said.

A risk worth taking

Sisson met the academic standards of the university and is now finding success on the field and in the classroom.

“I didn’t [have any trouble], but I know that’s a problem,” Sisson said.

Sisson said she took the gamble and it paid off for her, but it doesn’t always work out for other prospective Generals. Sisson said she had an easier time with recruitment than most do.

“I emailed [the coaches] and then they watched me at some tournaments,” Sisson said. After that, she applied and was soon accepted.