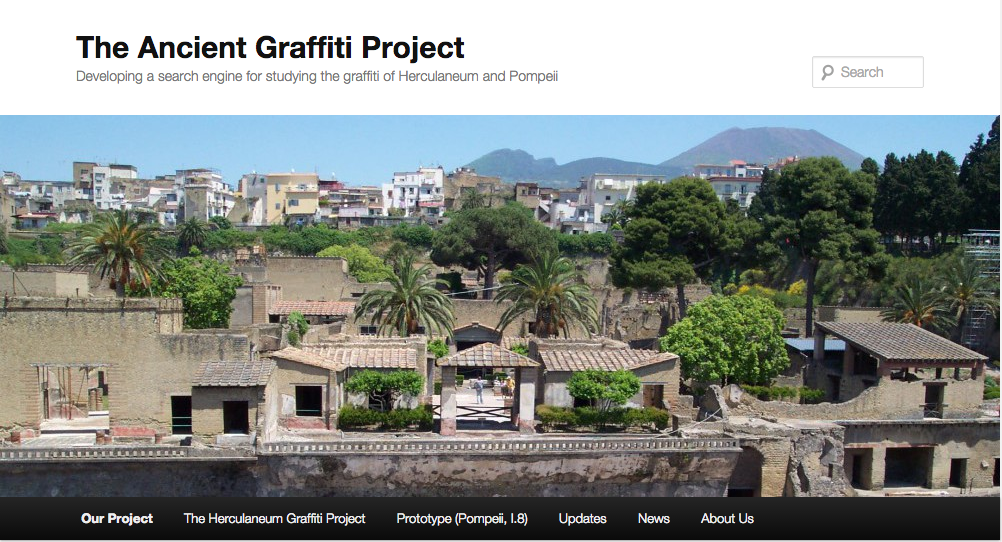 Two professors recently made a trip to Paris to present their ancient Italian graffiti search engine at an international conference through the Electronic Archive of Greek and Latin Epigraphy.

According to Benefiel, the purpose of the new web application is to promote the importance of cultural heritage through a database that allows students, scholars and researchers around the world to locate and research these writings.

The ancient wall writings that Benefiel and Sprenkle are documenting come from Herculaneum, Italy. The graffiti can consist of writing, symbols, drawings and slang.

Benefiel said that students in multiple departments have been critical to the development of the search engine. Students in one of Benefiel’s advanced Latin classes during winter 2013 began to digitize the inscriptions, and students in Sprenkle’s spring term 2013 class worked on web applications to create a prototype for the search engine.

“Within the space of about four months, W&L students had created a working prototype that we were able to present at multiples occasions and that we even got some ‘oohs’ and ‘ahhs’ for,” Benefiel said.

During the summer of 2014, a team of 30 professors and students, including seven past and present Washington and Lee students, travelled to Herculaneum with Benefiel to locate, identify, document and photograph graffiti. During the rest of the summer and early fall of 2014, Benefiel, Sprenkle and their team worked to digitize the graffiti findings from this summer to put into their web application.

Sprenkle emphasized the value of this experience for her students.

“It’s exactly the kind of experience they’ll have in the ‘real world,’ where they have a client who is in an expert in an area that the students don’t know, and the students need to communicate with the client.”

Benefiel reports that the graffiti project is still an ongoing venture, and that there are currently 60 instances of graffiti waiting to be fully transcribed and digitized for the web application.

The recent conference in Paris, known as the International Conference on Information Technologies for Epigraphy and Digital Cultural Heritage in the Ancient World, was a time for Benefiel and Sprenkle to show off their work, but also to get ideas from other researchers.

Their project, titled “The Herculaneum Graffiti Project: Re-envisioning the Ancient City,” is a contribution to the EAGLE, which is an international project Benefiel supervises.

“The conference was interesting because it was a mix of computer scientists and technologists and humanists,” Sprenkle said. “Each group had a different way of expressing some things.”

Benefiel added that hearing presentations from similar researchers was useful.

“It was nice to see other projects that were confronting the same challenges as ours,” Benefiel said.

Although she has provided a deep knowledge base for the project regarding the graffiti, Benefiel credits the students who worked on the project with the innovative ideas for how to best display the findings on the web application.

“This generation has grown up thinking about how to convey data and information through the Internet,” Benefiel said. “It’s wonderful to harness the creative thoughts of college students today.”

The current version of W&L’s graffiti web app can be found at ancientgraffiti.wlu.edu.